In-app purchases, internet gaming disorder and impulsivity: A look at the player base of Mystic Messenger 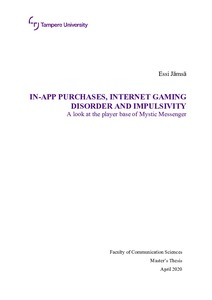 With this in mind, a survey was conducted amongst the players of the female-oriented free-to-play game Mystic Messenger on the social media site Reddit. The survey aimed to examine this three-way link by first asking questions about the players’ in-game behaviour, especially regarding their usage of money. Then, IGD-20, an instrument used for measuring the symptoms of internet gaming disorder, was used to see the prevalence of high scores. Additionally, the respondents were asked to fill in BIS11, a tool used for measuring impulsivity, to see if impulsive individuals scored higher on IGD-20 or were more prone to use a lot of money on the game.

In thirteen days, 340 responses were gathered, and analysis of the data asserted that the prevalence of internet gaming disorder was substantially high among recipients when compared to other literature, as were the impulsivity scores. The number of players who had used some money on the game was also disproportionately high when compared to the averages of many free-to-play titles. However, a strong link between in-app purchases and high IGD-20 or BIS-11 scores could not be established. Furthermore, the correlation between high IGD-20 and BIS-11 scores was established to only be weak in strength.