Modeling of propagation and measurement of neuronal action potentials in 3D 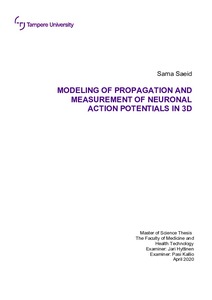 In the past decades, several methods have been developed which facilitate the culture, iso-lation, and investigation of neuronal networks in vitro. Neuronal networks provide an accessi-ble and economical chance to study complex emanating properties that simulate brain physiol-ogy. Microelectrode array (MEA) technology has emerged into a generally used and powerful methodology to analyze neural network activity. Computational modeling provides an exten-sive toolset for designing and interpreting neural recording devices. Modeling allows effective examination of large parameter spaces, for which laboratory research would not be feasible. A few studies have been performed in simulating the action potential propagating in an axon and its coupling with the electrodes, however, electromagnetic simulation based comparisons of the standard planar MEA and the 3D MEA by using finite element method have not been pub-lished prior to this work.
The objective of this work was to compare the standard 2D MEA and the newer 3D MEA by and interpret the potential factors affecting the recorded signal. The finite element method was used to simulate the propagating action potential along the axon and MEAs coupled to the ax-on and cell growth medium. Commercial computational software COMSOL, which provides an approximation of finite element method was employed. This software provides a chance to calculate the extracellular field potential distribution around the activated axon and simulate the recorded signals by planar and 3D MEAs from the surrounding environment. FitzHugh-Nagumo equations were used for simulating the traveling pulse along with the axon and other AC/DC modules utilized to define the enclosing domains. The geometrical effect of the stand-ard planar MEA and the newer 3D MEA as well as, various parameters affecting the final rec-orded voltage have been assessed in detail.
The result of the FitzHugh-Nagumo 3D axon model is quite comparable to the Hodgkin-Huxley action potential model. Furthermore, the simulation results of the MEAs provide de-tailed spatial and temporal information about the electrical behaviour of the extracellular envi-ronment. As it has been observed in the other experimental results, this model also demon-strates that the physical configuration and biological environment of the microelectrodes play a vital role in the results of the neuronal recording. These results confirm the inverse proportion between the electrode-neuron distance and amplitude of the recorded voltage, and the inverse relationship between the surface area and the magnitude of the detected AP. Furthermore, the recorded signals from the multiple axons by considering were been assessed. The results demonstrate complex recorded compound AP waveforms and revealed that the neuronal popu-lation can influence the amplitude and shape of the detected signals. It is shown that the fact that 3D microelectrodes have a larger surface area and spatial recording leads to higher volt-age averaging from the extracellular medium. This issue demonstrates as the lower amplitude of the recorded APs compared to the planar microelectrode.