Of Bloody Cups and Blue Liquid: The Social Acceptability of Lunette Website Marketing in the Middle East 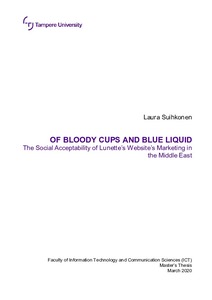 This Master’s Thesis focused on the marketing communications of the Finnish period cup manufacturer Lunette’s global English website. The research question was whether Lunette’s website’s marketing communications content has textual or visual elements that could be considered as taboos in the Middle Eastern cultures and would thus hinder the social acceptability and the user experience (UX) of the Middle Eastern website. These elements would then require special attention in the user experience design (UXD) process of localising and transcreating the website in the Middle East so that it would be culturally acceptable. The second research question was whether the global English website suffices in covering all the needs of those users who do not have a designated language variant or are culture bumps inevitable.

The theory of this Thesis consisted of research in the fields of marketing communications, UX, UXD and usability. Localisation and transcreation were also important theoretical constructions, and the Middle Eastern cultural norms, heavily influenced by Islam, were theoretical focal points.

This Thesis had two different research phases, and the research material consisted of Lunette’s global English website and the interviews conducted in the second part of the study. In the first phase that took place during a week in December 2018, textual and visual material that could be perceived as a taboo or culturally insensitive was collected from the Lunette website.

The material was analysed with the help of the literature examining Middle Eastern cultural norms and classified intuitively into seven categories. A typical example was chosen from each of the categories, and a hypothesis, altogether seven, was formed around each example for the next phase of the research. The hypotheses concentrated on images that were believed to violate Islamic norms of covering the female body and a ban on tattoos and text snippets that were assumed to include western values and concepts, implicit and explicit taboos and profane language.

The hypotheses’ validity was tested in the second phase of the research, where three Middle Eastern women aged 35–44 were interviewed. Two of the women were from Iran, and one was from Syria. The women were chosen as interviewees since they represent Lunette’s target group and are experts of their respective culture’s cultural norms and social acceptability. The interviewees were asked an open-ended question on whether the material from the Lunette website would work if it were taken as such to the interviewees’ cultures.

The interviewees clearly supported only one out of the seven hypotheses. The interviewees’ answers conflicted with each other and partly with the literature about the Middle Eastern cultural norms. Thus, no indisputable conclusions can be made based on the results. However, it is safe to say that Lunette’s global English website contains culturally insensitive elements. Virginity before marriage was a recurring theme in both the literature and interviews, and it is a central theme in the Middle Eastern cultural norms that Lunette’s website’s marketing communications seems to ignore. Hence, the global English website does not cover all its users’ needs without culture bumps.