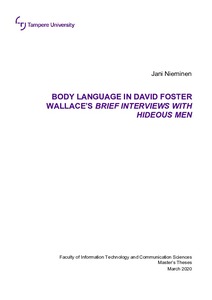 In my Master’s Thesis, I am exploring the role of body language and nonverbal communication in David Foster Wallace’s short story collection Brief Interviews with Hideous Men (1999). The collection has been seen as a very typical work for Wallace, showcasing his usual themes and techniques, but so far it has not been studied as much as his novels. The subjects of the stories in this collection mostly revolve around relationships between men and women, language, sexuality and communication.

My study shows that David Foster Wallace uses body language in his stories in a variety of ways. On the one hand, it is aligned with his criticism of postmodernism when it is used insincerely. At the same time, to some extent it cannot be controlled, and it can disrupt social order and challenge the will of self-conscious subjects. Most importantly, the embodied existence that unites people can also enable sincere and empathetic communication via body language.