The Impact of Economic Sanctions 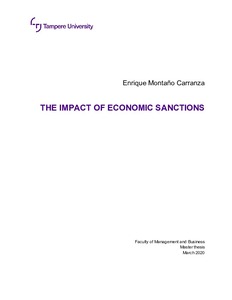 Economic sanctions are always on the stage of international trade. Countries use them often in international trade and the national economies in both ends are affected by them. The United States, the European Union, Russia and China are among the main issuers of economic sanctions, and the targets are usually chosen by political reasons. The thesis belongs to the Master’s Degree in Leadership for Change with orientation on Sustainable Business Management, and the aim is to provide guidance for making better political and practical decisions in an ever-changing environment.

The introductory chapter gives general background for the study. In the second chapter, the relevant literature is surveyed to provide key insights to the phenomenon. Previous studies suggest that all economic sanctions are not successful. They also highlight the reasons why economic sanctions might fail. There are several explanations for failure: the policy goals may be unclear, enforcement of the sanctions may be unilateral, and third-party states seek advantage from increasing their trade with the target country. There also exist several uncertainties about the effects of economic sanction with due consequences on investors’ behaviour. Moreover, empirical evidence shows that the readjustments in global Foreign Direct Investments (FDI) is a noteworthy factor in busting economic sanctions.

The third chapter tests the main hypothesis of the thesis: when economic sanctions are imposed, there is a reaction in the FDI stock of the United States (US) in the target countries. In the analysis, economic sanctions between 2000-2017 are investigated, and 54 countries with available data are selected for close scrutiny. The empirical analysis is carried out by SPSS, and T- tests and non-parametric tests are used. Contrary to the hypothesis inspired by previous studies, the results show that US FDI have not changed before or after the implementation of economic sanctions. These contradictory results are then explained: nowadays, US usually targets specific industries or individuals to avoid collateral damage and utilizes policy coalitions with partners with notable trade relations with the target country. Therefore, the modern way of conducting economic sanctions is more accurate and better coordinated than before.