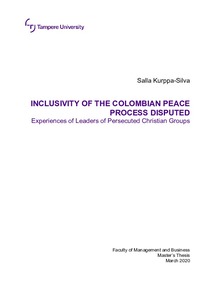 Colombia has been in an internal multifaceted interstate conflict of multiple actors since 1964. Several efforts for peace have been made over the years. In 2016, after a four-year peace process, a Peace Agreement was signed between the government and the largest guerrilla group FARC. The goal of the agreement is to end the armed conflict and to build sustainable peace including the whole society. The peace process that led to the agreement has been talked about as one of the most inclusive in history, because of the width of inclusion of social groups.

The theoretical background of this study is in legitimacy-focused peacebuilding, focusing especially on meaningful inclusivity and the role of religion in peacebuilding. The research was implemented through seven in-depth responsive qualitative interviews to leaders of persecuted Christian groups in Colombia. The interview material was analyzed through data analysis.

The findings of this research, based on the experiences of the interviewees, indicate that the persecuted Christian groups have not been meaningfully included in the peace process and that the conflict-bound suffering that they face has not relevantly changed. The evaluative conclusion is that the lack of inclusion of this social group indicates deficiency in the quality of the peace process and can further explain results of peace development in Colombia.