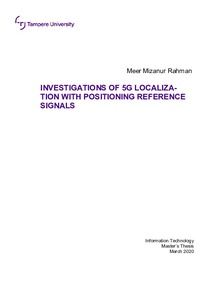 TDOA is an user-assisted or network-assisted technique, in which the user equipment calculates the time of arrival of precise positioning reference signals conveyed by mobile base stations and provides information about the measured time of arrival estimates in the direction of the position server. Using multilateration grounded on the TDOA measurements of the PRS received from at least three base stations and known location of these base stations, the location server determines the position of the user equipment.

Different types of factors are responsible for the positioning accuracy in TDOA method, such as the sample rate, the bandwidth, network deployment, the properties of PRS, signal propagation condition, etc. About 50 meters positioning is good for the 4G/LTE users, whereas 5G requires an accuracy less than a meter for outdoor and indoor users. Noteworthy improvements in positioning accuracy can be achievable with the help of redesigning the PRS in 5G technology.

The positioning accuracy also analyzed with different sample sizes. With an increased sample size, a decrease in the root mean square error and a crucial increase in the SNR was observed.

From this thesis investigation, it is inevitable to accomplish that two different analyses (sample size and bandwidth) done in a different way with the targeted output. A bandwidth of 38.4 MHz and sample size N = 700 required to achieve below 1m accuracy with SNR of 47.04 dB.