The effect of watching eyes on perception of pain intensity 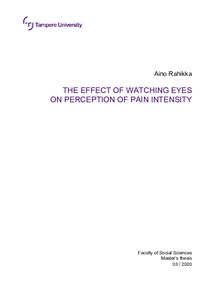 Previous studies have shown how cognitive-emotional top-down processes can affect conscious pain perception. The experience of pain has been found to alter when, for example, attention direction or affective state are manipulated. Furthermore, interpersonal factors have also been found to have alleviating effects on pain. Because eye contact offers a fundamental connection between two people in all meetings, this study aimed to examine whether the mere perception of direct eye gaze of another person could have an effect on the perception of pain intensity. Following previous research on eye gaze and pain perception, we reasoned that there could be two possible effects of eye gaze direction: perception of direct eye gaze could heighten or lower pain intensity compared to averted eye gaze. These two hypothesized contradictory effects are explained through two different cognitive-affective processes. We also investigated whether the mere presence of another person could have a lowering effect on pain perception. In this study, 98 female participants were asked to rate the amount of pain intensity they felt while they experienced mild to moderate pressure-pain in their finger caused by a flat-tipped stylus. During pain induction, the first experimental group received direct eye gaze, the second group received averted eye gaze and the third group experienced the pain induction alone. Affective state before and after pain induction and self-focused attention were measured by questionnaires. The results showed no differences in pain intensity between the experimental groups. Thus, no effect of gaze direction or another individual’s presence on pain perception was found. In addition, no attentive or affective differences were found between experimental groups. It then seems, that eye contact is simply not a strong enough signal to affect this powerful physiological sensation. Finally, the limitations of the study and future directions are discussed.