From maintaining stability to securing change : Expert perceptions on how the Civilian Security Sector contributes to resilience in Ukraine. 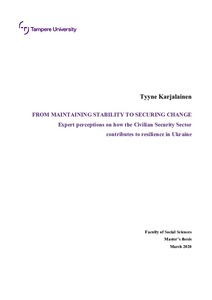 Six years after the Euromaidan, Ukraine has taken significant steps in order to reform its civilian security provision, namely the rule of law and law enforcement, to become more aligned with the standards demanded by the Euromaidan demonstrators. What the civilian security sector (CSS) should look like, and who should participate in the design and the controlling of it, are topical issues in Ukraine today, both local and international interest indicating the relevance of the topic for the society. This research explores whether a popular resilience theory could help to understand why reform is so extensively pursued in the CSS and what meanings are attached to the role of the CSS in the Ukrainian society. The research seeks to answer what could resilience be in the particular security context of Ukraine, and what role should the CSS take in constructing that resilience. Basing on expert interviews and a literature review, this research provides analysis on how particular practices, processes and structures in the CSS are believed to construct resilience in Ukraine: how the rule of law and law enforcement are found to contribute to the recovery of the society from disturbances, how they construct the capacity of the society to adapt to future risks, and how they support coping with shocks today. The research also aims to make a contribution to the theoretical resilience literature by exploring the applicability of the resilience concept to a study of security provision in a local context, namely the Ukrainian security framework.
The research finds that the Ukrainian civilian security sector has demonstrated notable capability of building societal resilience, as it has reformed and developed its functions more acceptable to the society, despite the ongoing armed conflict on the Ukrainian territory. Developments such as increasing the inclusion of civil society in the processes of security design and the opening up of the security institutions to public monitoring are found outstanding in the turbulent circumstances in Ukraine today. The reform of the CSS is perceived to represent both recovery and adaptive capability of the society. Furthermore, the CSS reform is believed to have made the society more resilient against risks that await in the future. At the same time, however, the study finds that the prevailing corruption and impunity inside the CSS structures are feared to risk the positive developments and to undermine the role of rule of law and law enforcement institutions as constructors of resilience in the society. With regard to the theoretical resilience framework, the research concludes that resilience thinking seems to well capture meanings attached to the CSS reform in Ukraine: the framework seems helpful in conceptualizing why the CSS is demanded to start to prioritize the protection of citizens (vs. the protection of the state) and the adaptation and recovery of the whole society instead of protecting the ruling elites. However, also difficulties in the application of the framework are identified: some risks, such as those related to the armed conflict, appear to entail elements that are difficult to address using resilience thinking, other security paradigms appearing more useful.