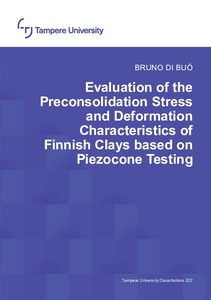 The design of structures and infrastructures in soft soil areas represents an important challenge in geotechnical engineering owing to the poor soil properties in terms of strength and compressibility. In this scenario, a proper geotechnical investigation plan is fundamental to evaluate geotechnical parameters for conducting stability analysis and settlement prediction. Over the past decades, in Finland, the field vane test had been widely adopted as the traditional field investigation tool.

However, recent studies conducted at Tampere University (formerly Tampere University of Technology) have revealed that this test often encounters many problems in terms of accuracy, precision, and results interpretation. The present study aims to overcome these issues and improve the quality of ground investigation data in Finnish soft clays promoting the use of piezocone testing. Although this test has proven high reliability in different soil conditions, its applicability in soft sensitive clays requires high accuracy in terms of measurement and interpretation.

Therefore, an extensive experimental program has been conducted on five soft clay sites located in Finland, aiming to build a high quality database of in situ and laboratory test data. In particular, seismic and resistivity piezocones have been adopted for field testing, whereas the laboratory program comprised index tests, one-dimensional constant rate of strain consolidation tests, and triaxial tests. As sample quality represents a key issue in soft sensitive clays, several sampling apparatuses and procedures have been tested to obtain high-quality undisturbed samples. Finally, the collected dataset has been exploited to establish correlations for evaluating the preconsolidation stress and deformation characteristics of the investigated clays. An analytical method based on a spherical cavity expansion theory and critical state soil mechanics solution has been adopted to derive simplified analytical equations for predicting the preconsolidation stress and the constrained modulus based on the piezocone test data.

Results indicate that there is a fairly good agreement between the predicted values and the experimental data. Moreover, reliable correlations between the soil compressibility and the natural water content were established while the applicability of the piezocone testing to predict the deformation characteristics turned out to be characterized by high uncertainties.