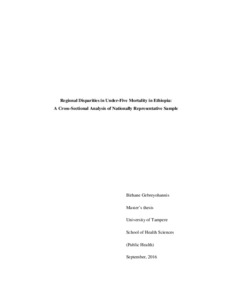 Background: Reduction of inequalities has been the ultimate objective of the global social and health strategy. It is yet an internationally endorsed target stipulated among the 17 Sustainable Development Goals (SDGs) set to be achieved by 2030. Identifying the determinants and extent of perceived inequality in under-five children mortality amongst regions in Ethiopia is central in order to take appropriate policy actions and this requires an evidence based approach. This study evaluates the regional disparities for the risk of under-five mortality in Ethiopia. The study analyzed various biological, environmental and socio-economic factors explaining the regional disparities for the risk of under-five mortality using a nationally representative sample of women who gave birth during last five year preceding the survey.

Conclusions: The findings suggest that significant disparity on under-five children mortality exist among regions of Ethiopia. Child, environmental and socio-economic factors explain the relationship between region of residence and under-five mortality. Child survival interventions shall target on these factors to minimize inequality differentials and thereby reduction in the under-five mortality in the country.