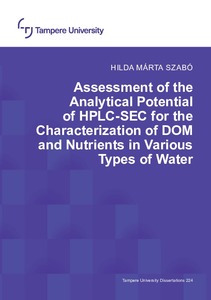 This study focused on high performance size exclusion liquid chromatography (HPLC-SEC) combined with two ultraviolet (UV, 254 nm and 224 nm) detection wavelengths to detect humic-like compounds and two fluorescence (FLU) excitation/emission (tyrosine-like and tryptophan-like) wavelengths to detect protein type compounds in water samples. Targeted particularly were further possibilities of this method, such as finding suitable chromatographic surrogates for organic matter and nutrient indicators for water types such as catchment surface waters, well waters, and onsite wastewater effluents, which have been studied little before. It was thus necessary to determine the optimum analytical conditions for exacting wastewater effluent analysis in term of eluent strength, eluent pH, and sample injection volume. Additionally, this study provided valuable information on the spatial and temporal behavior of dissolved organic matter along a catchment area and on the quality of onsite wastewater effluent and well water in sparsely populated areas.

DOM concentration dropped along the catchment, as 35-75% of dissolved organic carbon (DOC) was eliminated. DOM in drains had up to 80% high molecular weight (HMW) fraction and lakes only 50-60% HMW. Drains had high DOC in summer and lakes in winter and spring with seasonal increase in DOC resulting from increased HMW fractions in these waters. The water treatment plant eliminated HMW fractions from raw water up to 100%, intermediate MW (IMW) fractions up to 87%, and low LMW fractions up to 66%. A seasonal increase in raw water DOM was detected in drinking water samples as increased IMW and appearance of HMW fractions. Of the two protein-type detections, tryptophan-type signals were clearly measured in surface water. Tryptophan-like FLU, as sum of peak height (SPH), was consistently higher in the drain affected by agriculture than in the drain in the mire area.

The study on well waters showed that, on average, shallow and deep well water differ little in quality in the sparsely populated agricultural areas studied. According to HPLC-SEC-UV254, high-DOC well water samples had clear and often dominant HMW fractions and low-DOC samples hardly any HMW fractions but dominant IMW fractions. The LMW fraction, correlating with nitrate, indicates anthropogenic influence. Nitrate was precisely calculated from the peak height (PH) of the LMW fraction detected by UV-224.

This study highlights the fact that secondary interactions, unwanted in SEC can be exploited in nitrate measurement of well waters and BOD assessment of high strength wastewater effluents.