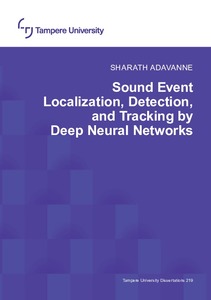 In this thesis, we present novel sound representations and classification methods for the task of sound event localization, detection, and tracking (SELDT). The human auditory system has evolved to localize multiple sound events, recognize and further track their motion individually in an acoustic environment. This ability of humans makes them context-aware and enables them to interact with their surroundings naturally. Developing similar methods for machines will provide an automatic description of social and human activities around them and enable machines to be context-aware similar to humans. Such methods can be employed to assist the hearing impaired to visualize sounds, for robot navigation, and to monitor biodiversity, the home, and cities.

A real-life acoustic scene is complex in nature, with multiple sound events that are temporally and spatially overlapping, including stationary and moving events with varying angular velocities. Additionally, each individual sound event class, for example, a car horn can have a lot of variabilities, i.e., different cars have different horns, and within the same model of the car, the duration and the temporal structure of the horn sound is driver dependent. Performing SELDT in such overlapping and dynamic sound scenes while being robust is challenging for machines. Hence we propose to investigate the SELDT task in this thesis and use a data-driven approach using deep neural networks (DNNs).

The sound event detection (SED) task requires the detection of onset and offset time for individual sound events and their corresponding labels. In this regard, we propose to use spatial and perceptual features extracted from multichannel audio for SED using two different DNNs, recurrent neural networks (RNNs) and convolutional recurrent neural networks (CRNNs). We show that using multichannel audio features improves the SED performance for overlapping sound events in comparison to traditional single-channel audio features. The proposed novel features and methods produced state-of-the-art performance for the real-life SED task and won the IEEE AASP DCASE challenge consecutively in 2016 and 2017.

Sound event localization is the task of spatially locating the position of individual sound events. Traditionally, this has been approached using parametric methods. In this thesis, we propose a CRNN for detecting the azimuth and elevation angles of multiple temporally overlapping sound events. This is the first DNN-based method performing localization in complete azimuth and elevation space. In comparison to parametric methods which require the information of the number of active sources, the proposed method learns this information directly from the input data and estimates their respective spatial locations. Further, the proposed CRNN is shown to be more robust than parametric methods in reverberant scenarios.

Finally, the detection and localization tasks are performed jointly using a CRNN. This method additionally tracks the spatial location with time, thus producing the SELDT results. This is the first DNN-based SELDT method and is shown to perform equally with stand-alone baselines for SED, localization, and tracking. The proposed SELDT method is evaluated on nine datasets that represent anechoic and reverberant sound scenes, stationary and moving sources with varying velocities, a different number of overlapping sound events and different microphone array formats. The results show that the SELDT method can track multiple overlapping sound events that are both spatially stationary and moving.