Implementation of a Radio Frequency Fingerprint Detector Based on GNSS Signals 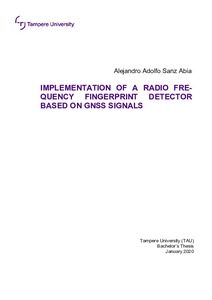 Geolocation is one of the most significant manifestations of the current development of information technologies and it is used for multiple applications, such as mobile networks, military systems, or in the stock market. For that reason, it is important to verify the source of this type of signals, as they could be susceptible to being tricked by spoofing attacks, namely fake transmitters. This thesis is based on the development of a GNSS signal type classifier based on radio frequency (RF) fingerprinting methods that will determine if a signal belongs to an authorized transmitter or if it comes from a non-authorized GNSS signal generator/repeater. First, a total of 620 signals have been recorded in lab environments, follows: 40 different scenarios of real GNSS signal (with antennas located on the roof of the university) and 580 scenarios of the generated signal (using a GNSS signal generator). Each of the scenarios contains different types of signals (different GNSS constellations and/or bands, different satellites, etc.). Then, using a MATLAB-based simulator, the recorded signal is read, a certain time-frequency transform is applied (in this case the discrete Wavelet Transform), and an image of the wavelet transform of each sample is saved. These images include the features of the signal's RF fingerprinting. Next, a machine learning algorithm called SVM, also designed in MATLAB, is used. This algorithm classifies two or more different signal classes, and finally evaluate the classification accuracy. We used 80% of the images in each category for training and the remaining 20% for testing. Finally, a confusion matrix is obtained showing the accuracy obtained by the SVM algorithm in the testing phase.

The analysis of the results has shown that the SVM classification algorithm can be a very effective model for the identification of GNSS transmitters through the use of fingerprinting features. It has been observed that when the Spectracom scenario is configured with more than one satellite, accuracy is lower compared to being configured with only one. This is because the signal obtained when more than one satellite is configured is more similar to the signal obtained from the antenna in comparison to the single satellite configuration, and for that reason, SVM has more difficulty in classifying it correctly. Another observation is that accuracy is also reduced when more than two categories are classified at the same time compared to a binary classification. Despite this, the accuracy is very high in the scenarios used, with 99.47% being the lowest value obtained and 100% the highest. Therefore, this implementation of RF fingerprinting methods is very promising in the context of determining whether a signal belongs to the actual GNSS satellite constellation or to a signal generator with a high level of accuracy.