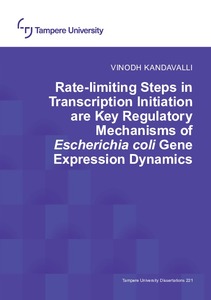 In all living organisms, the “blueprints of life” are documented in the genetic material. This material is composed of genes, which are regions of DNA coding for proteins. To produce proteins, cells read the information on the DNA with the help of molecular machines, such as RNAp holoenzymes and a factors.

Proteins carry out the cellular functions required for survival and, as such, cells deal with challenging environments by adjusting their gene expression pattern. For this, cells constantly perform decision- making processes of whether or not to actively express a protein, based on intracellular and environmental cues.

In Escherichia coli, gene expression is mostly regulated at the stage of transcription initiation. Although most of its regulatory molecules have been identified, the dynamics and regulation of this step remain elusive. Due to a limited number of specific regulatory molecules in the cells, the stochastic fluctuations of these molecular numbers can result in a sizeable temporal change in the numbers of transcription outputs (RNA and proteins) and have consequences on the phenotype of the cells. To understand the dynamics of this process, one should study the activity of the gene by tracking mRNA and protein production events at a detailed level.

Recent advancements in single-molecule detection techniques have been used to image and track individually labeled fluorescent macromolecules of living cells. This allows investigating the intermolecular dynamics under any given condition. In this thesis, by using in vivo, single-RNA time-lapse microscopy techniques along with stochastic modelling techniques, we studied the kinetics of multi-rate limiting steps in the transcription process of multiple promoters, in various conditions.

Specifically, first, we established a novel method of dissecting transcription in Escherichia coli that combines state-of-the-art microscopy measurements and model fitting techniques to construct detailed models of the rate-limiting steps governing the in vivo transcription initiation of a synthetic Lac-ara-1 promoter. After that, we estimated the duration of the closed and open complex formation, accounting for the rate of reversibility of the first step. From this, we also estimated the duration of periods of promoter inactivity, from which we were able to determine the contribution from each step to the distribution of intervals between consecutive RNA productions in individual cells.

Second, using the above method, we studied the a factor selective mechanisms for indirect regulation of promoters whose transcription is primarily initiated by RNAp holoenzymes carrying a70. From the analysis, we concluded that, in E. coli, a promoter’s responsiveness to indirect regulation by a factor competition is determined by its sequence-dependent, dynamically regulated multi-step initiation kinetics.

Third, we investigated the effects of extrinsic noise, arising from cell-to-cell variability in cellular components, on the single-cell distribution of RNA numbers, in the context of cell lineages. For this, first, we used stochastic models to predict the variability in the numbers of molecules involved in upstream processes. The models account for the intake of inducers from the environment, which acts as a transient source of variability in RNA production numbers, as well as for the variability in the numbers of molecular species controlling transcription of an active promoter, which acts as a constant source of variability in RNA numbers. From measurement analysis, we demonstrated the existence of lineage-to-lineage variability in gene activation times and mean transcription rates. Finally, we provided evidence that this can be explained by differences in the kinetics of the rate-limiting steps in transcription and of the induction scheme, from which it is possible to conclude that these variabilities differ between promoters and inducers used.

Finally, we studied how the multi-rate limiting steps in the transcription initiation are capable of tuning the asymmetry and tailedness of the distribution of time intervals between consecutive RNA production events in individual cells. For this, first, we considered a stochastic model of transcription initiation and predicted that the asymmetry and tailedness in the distribution of intervals between consecutive RNA production events can differ by tuning the rate-limiting steps in transcription. Second, we validated the model with measurements from single-molecule RNA microscopy of transcription kinetics of multiple promoters in multiple conditions. Finally, from our results, we concluded that the skewness and kurtosis in RNA and protein production kinetics are subject to regulation by the kinetics of the steps in transcription initiation and affect the single-cell distributions of RNAs and, thus, proteins. We further showed that this regulation can significantly affect the probability of RNA and protein numbers to cross specific thresholds.

Overall, the studies conducted in this thesis are expected to contribute to a better understanding of the dynamic process of bacterial gene expression. The advanced data and image analysis techniques and novel stochastic modeling approaches that we developed during the course of these studies, will allow studying in detail the in vivo regulation of multi-rate limiting steps of transcription initiation of any given promoter. In addition, by tuning the kinetics of the rate-limiting steps in the transcription initiation as executed here should allow engineering new promoters, with predefined RNA and, thus, protein production dynamics in Escherichia coli.