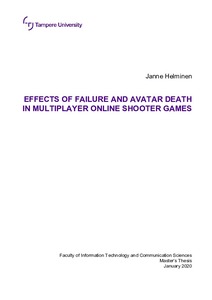 Even though casual games capture large audiences, hardcore games are increasing in popularity evident by the success of Dark Souls games and the rise of the battle royale genre. These hardcore games often feature gruesome punishments for failure such as permadeath or a great loss of progress. This study investigates how players can fail in online multiplayer shooter games, how they are penalised and how the penalties affect the overall player experience.
Formal gameplay analysis was conducted on Counter Strike: Global Offensive, Overwatch and PlayerUnknown's Battlegrounds to identify failure mechanics and their punishments for avatar death. Then, an online player experience survey was deployed to measure the player experience of each of the sample games.
The analysis of the results revealed no connection between the severity of the game's punishments and the overall player experience. However, the data suggested the players of PUBG, the most severely punishing game, report their experiences to be more memorable than the players of the other games. Furthermore, the participants of the PUBG survey reported more physical reactions to winning supporting the notion that failure mechanics and avatar death do influence the player experience. Based on those results, I concluded that no clear connection between avatar death and player experience could be found. However, the interesting findings do warrant further exploration into the topic.