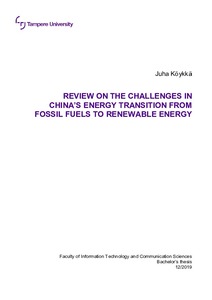 This thesis looks into the challenges China is facing in its energy transition from fossil fuels to renewable energy. The challenges are analyzed from technical, market, and policy viewpoints in order to form a general view of the transition and factors affecting it. This thesis reviews existing literature on the subject and combines major findings from different studies and papers together. Lastly this thesis summarizes policy proposals for further integration of renewable energy into the Chinese power system.
China is the worlds’ leading energy producer and consumer. China also leads in electricity produced and consumed and in renewable energy produced. Between 2010 and the first half of 2019 China has invested more in renewable energy than any other country in the world. There are good reasons for China to heavily invest in renewable energy. Coal-burning poses a serious public health problem for Chinese citizens and China has the world’s largest greenhouse gas emissions, so phasing out coal-fired power in favor of renewable energy would benefit both Chinese people and the global climate. Renewable energy and electrification also provide China a possibility to reduce its dependency of oil imports and to gain self-sufficiency in energy sector.
Chinese energy sector has been built on its vast coal resources and coal-fired power still dominates the generation mix. Due to this the power system and electricity market have been very inflexible. The tariffs for electricity have been heavily government regulated as has been the planning of electricity production. This system hasn’t allowed for a widespread integration of renewable energy, as renewable energy is inherently an energy source, whose output varies in time. Therefore, increasing flexibility of both the power system infrastructure and the electricity market is needed in order to integrate further renewable energy production into the Chinese power system.
There have been reforms aiming to reduce government regulation on the electricity market and to increase the flexibility of the power system. Transmission and distribution tariff reform unbundled transmission and distribution prices from the electricity tariffs and there have been efforts to promote direct trading of electricity between the producers and the consumers. One key object of the reforms is to establish electricity trading with the renewable energy resources rich northern and southwestern provinces and the coastal and central provinces, where the biggest load centers are located. New UHV transmission lines have been constructed to connect different regions, but trading between regions is still hindered by conflicts of interests between the local provincial governments.
The scattered renewable energy legislation that lacks practicability is one culprit behind these conflicts. In the future, the central government needs to upgrade the legislation and implement concrete measures to ensure that local governments and energy enterprises work towards the national objective of renewable energy integration. At the same time government needs to develop open regional wholesale and retail markets for electricity, also real time spot markets. To increase flexibility of the power system infrastructure, ancillary services and demand response markets are needed. Lastly, central government needs to gradually phase out feed-in tariffs for wind power and solar photovoltaics (PV), in order to avoid over-capacity construction and to ensure the long-term profitability of new energy companies.