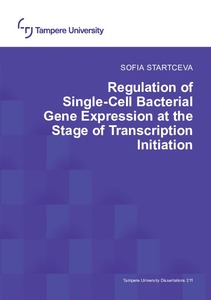 Biolääketieteen tekniikan tohtoriohjelma - Doctoral Programme in Biomedical Sciences and Engineering
Lääketieteen ja terveysteknologian tiedekunta - Faculty of Medicine and Health Technology
This publication is copyrighted. You may download, display and print it for Your own personal use. Commercial use is prohibited.

One of the qualities that allow bacterial cells to survive in diverse, ﬂuctuating environments is phenotypic plasticity, which is the ability to exhibit diﬀerent phenotypes depending on the environmental conditions. Phenotypic plasticity arises via coordinated work of small genetic circuits that provide the cell with the means for decision-making. The behavior of these circuits depends, among other factors, on the ability of protein numbers to cross certain thresholds for a suﬃcient amount of time. In bacteria, RNA numbers largely deﬁne protein numbers and thus can be used to study the decision-making processes.

Previous research outlined the eﬀects of mean and variance in RNA or protein numbers on the behavior of small genetic circuits. However, noise in gene expression is often highly asymmetric. This could impact the threshold-crossing abilities of molecular numbers in a way that is not detectable by considering only their mean and variance.

The focus of this thesis is to study the regulation of multi-step kinetics of bacterial gene expression in live bacteria and its eﬀects on the shape of the distribution of RNA or protein levels. In particular, the thesis investigates how the rate-limiting steps in bacterial transcription, such as closed and open complex formation, intermittent inactive states, and promoter escape contribute to the dynamics of RNA numbers, and how this dynamics propagates to the distribution of protein levels in a cell population. This study made use of already existing techniques such as measurements at the single-RNA level and dynamically accurate stochastic modeling, complemented by the novel methodology developed in this work.

First, the thesis introduced a new method for estimating the numbers of ﬂuorescently tagged molecules present in a cell from time series data obtained by microscopy. This method allows improving the accuracy of the estimation when ﬂuorescently tagged molecules are absent from the cell image for time intervals comparable with cell lifetime. Second, the new methodology for dissecting in vivo kinetics of rate-limiting steps in transcription initiation was proposed. Applying this methodology to study initiation kinetics at lac/ara-1 promoter provided insights on the amount, duration, and reversibility of the rate-limiting steps in this process. Further, the thesis investigated the kinetics of transcription activation of lac/ara-1 promoter at various temperatures. The results indicate that additional rate-limiting steps emerge in inducer intake kinetics as temperature decreases from optimal (37 °C). Finally, the focus was shifted speciﬁcally to quantifying the asymmetry and tailedness in RNA and protein level distributions, since these features are relevant for determining threshold crossing propensities. Here, these features were found to depend both on promoter sequence and on regulatory molecules, thus being evolvable and adaptable.

Overall, the work conducted in this thesis suggests that asymmetries in RNA and protein numbers may be crucial for decision-making in bacteria, since they can be regulated by promoter sequence, regulatory molecules levels, and temperature shifts. The thesis also contributes to the pool of existing methodology for studying in vivo bacterial gene expression using single-cell biology approach. These ﬁndings should be of use both for better understanding of natural systems and for ﬁne-tuning behavior of synthetic gene circuits.