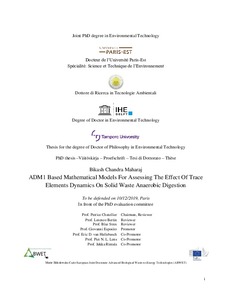 Anaerobic digestion (AD) is one of the most trace element (TE) rich metabolic processes in biology. Indeed, TEs are important structural components of various enzymes in the AD process. The role and fate of TEs (Fe, Ni and Co) in AD is poorly understood due to their complex biogeochemistry. The low detection limit of analytical instruments and the time consuming and challenging nature of the experimental procedures are major obstacles to the quantification of TEs in AD. In this thesis, three separate mathematical models based ADM1 have been developed to simulate the TEs dynamics and speciation pattern in an AD reactor. In particular, a TE precipitation/dissolution model, a TE complexation model and a TE adsorption model have been progressively developed to predict the effect, role and fate of TEs in an AD batch system. In all the models the extent of microbial activity in the AD process is a function of the free TE concentration in the liquid phase, which is in equilibrium with the physicochemistry of the AD reactor. The precipitation/dissolution model considers the interactions of TEs with inorganic carbon (e.g. HCO3- and CO32-), phosphorous (e.g. PO43-, HPO42-, H2PO4-) and sulfur (e.g. HS- and S2-) components. New chemical equilibrium acid-base and precipitation reactions have been implemented to study the interactions of Fe, Ni, Co with carbonate, phosphate and sulfide components. The effects of deficiency, stimulation, inhibition and toxicity of TEs on microbial activity have been modelled based on a hormesis type TE dose-response inhibition function. The microbial uptake of TE and the TE inhibition on special microbial activities have been defined as well. Release of TEs as a disintegration product has been also considered to account for the TE content of the organic substrate. Model scenarios have been simulated to analyze the dynamics of TEs, starvation of TEs and the effect of initial sulfur-phosphorus ratio. In the complexation model, the interactions of TEs with organic chelators have been predicted. TE complexation reactions with VFAs and EDTA have been incorporated in the extended ADM1 model in addition to TE precipitation/dissolution processes. New acid-base chemical equilibrium reactions have been incorporated to model the dynamics of EDTA species. Complexation process rates have been defined as well. The model is able to quantify the effect of EDTA/VFA -TE complexation on methane production. Further, effect of initial Ca and Mg concentration on TE complexation has been predicted in a separate modelling scenario. Finally, a general framework able to take into account the precipitation/dissolution and complexation reactions, as well as the interaction of TEs with various surfaces available in the AD system has been developed. The model tracks the TEs dynamics in a batch anaerobic digester and as an extension of the previous contributions, incorporates the adsorption reactions of TEs with biomass, inert and precipitate (FeS). The concepts of free and occupied binding sites, and binding site density for the various surfaces have been incorporated into the model. Simulation scenarios were able to predict the effect of various organic matter concentrations, initial TE concentrations, initial Ca-Mg concentrations, initial EDTA concentrations and change in TE binding site density for biomass, inert and precipitate on cumulative methane production and TE speciation.