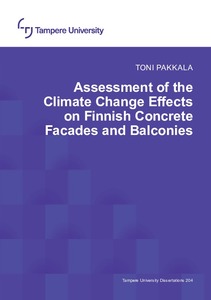 Although Finnish building stock is young, a significant share of Finland’s national property consists of buildings. A major part of that stock is now aged between 30 and 60 years and their outdoor facing structures are reaching or have already reached their ren- ovation date. The value of renovation has increased steadily since the 1990s and is now surpassing the value of new construction. Thus, maintenance and safeguarding the service life of the existing building stock is recognised as having a major effect on the national wealth. At the same time, the quality of, for example, the concrete facades and balconies built that time has found to be poor, mainly because majority of them were built during the time when quality requirements were not even at the level of need of the current climate.

The goal of this research is to determine what needs to be done in the building stock to adapt to climate change. The research is limited to outdoor exposed concrete facades and balconies because of their significant role in the Finnish building stock, and because the current condition and deterioration mechanisms and their rates have been extensively studied before. However, the aim is that most of the findings can be utilised also in new construction, regardless of the construction material.

This thesis discusses the effect of climate change by two ways: its effect on the intensity of selected climatic factors and their effect on the deterioration rate of the best-known deterioration mechanisms of concrete, i.e. corrosion of reinforcement and freeze-thaw damage. The results show that climate change is going to intensify especially wind- driven rain (WDR) load, which is a significant part of almost all of the most critical deterioration mechanisms. However, the effect is highly dependent on the location and the direction of orientation of the structure. The highest deterioration rates have been shown to be in coastal areas and southern areas and in structures facing southern directions. The geographical dependence is significant because a considerable share of Finnish existing building stock is located in the coastal area or southern Finland where the climatic load is and will be the most severe. On the other hand, the deterioration rate is and will be low in Lapland and so is the share of buildings. However, results imply that even with insufficient quality, the concrete structures can have a decent service life and the structures can be effectively protected against climatic factors, for example, by sheltering. The results of this study can be used to target both the actual methods used in renovation and preventative maintenance methods.