The automotive industri and the Dieselgate case 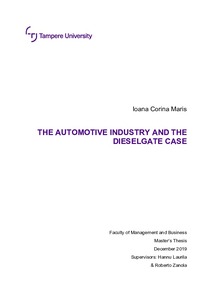 In the last few years, environmental pollution and especially vehicle pollution has been the subject of numerous debates all over the world. Following the scandal on the handling of emissions from diesel vehicles through the installation of defeat device systems by the Volkswagen Group, the attention on Diesel engines and especially on the severity of the emissions produced by diesel fuel has become more and more remarkable. The aim of this thesis is to explain the differences between the various types of engines on the market, the consequences caused by the polluting substances emitted by the vehicle exhaust pipe and the events that led to the detection of the fraud implemented by the Volkswagen Group. Furthermore, a survey was carried out on with the aim to try to understand consumers' perception of vehicular pollution, propensity to use engines powered by alternative energy sources instead of diesel engines and the grade of awareness regarding the Volkswagen case. Finally, in order to try to get answers on the future of the automotive market and especially on the future of diesel vehicles, an analysis was made of the forecasts and statistics made by automotive industry analysts.