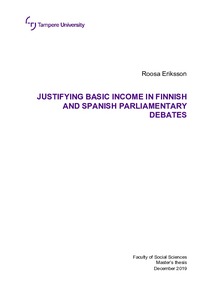 Yhteiskuntatutkimuksen tutkinto-ohjelma
Yhteiskuntatieteiden tiedekunta - Faculty of Social Sciences
This publication is copyrighted. You may download, display and print it for Your own personal use. Commercial use is prohibited.

Over the 2010s, unprecedented policy attention has been brought to universal basic income. The proposal of giving all members of a polity a periodic, unconditional and individual cash transfer has effectively shifted from the margins to concrete political debates in Europe. This raises new questions about how local policy-makers justify basic income in these debates, as public justifications have a role in shaping the perceived legitimacy of a policy proposal. Although there has been an expansion in basic income research, only a handful of studies have addressed this dimension.

The aim of the study was to examine how parliamentarians in two European countries, Finland and Spain, justify basic income. The case countries were selected on the bases that there has been a wide discussion on basic income in the recent decades in both countries, and basic income related pilot projects have recently taken place in both. The two countries also have a history of persistent long-term unemployment, which has been argued to possibly enhance interest in basic income.

The study addressed how the purpose of basic income is understood in Finnish and Spanish parliamentary debates and to what extent justifications shared similarities across case parliaments. The data consisted of plenary sitting documents (N = 104) from Finnish and Spanish parliaments that contained at least one mention of basic income over the periods of 2005–2007 and 2015–2017, (N = 89 documents from Finland, N = 15 from Spain). The case study approached basic income debates from the theoretical perspectives of domestication of global models and epistemic governance. Discourse analysis and the epistemic governance framework were utilized to organize findings. The goals in arguments for basic income were identified and linked to assumptions about the environment, actors, norms, and values they relate to.

The results presented the three most prevalent discourses according to the purpose of basic income. These were i) fixing the safety net, ii) encouraging activity, and iii) emancipation of popular classes. In the safety net discourse, the existent social benefits system was perceived to be a result of a mismatch of short-term reforms for fixing systemic problems and basic income, in contrast, was positioned as a cohesive reform. Work was understood as an increasingly insecure source of income, and old group categorizations of benefits receivers as no longer matching with the new situation. The activity discourse depicted humans as naturally striving towards activity and basic income as a means to enhance work participation. In the emancipation discourse, basic income was a means for increasing material independence, which was seen as a necessary precondition for fulfilling democratic rights. The safety net discourse was shared in basic income justifications across the case parliaments, the activation discourse was specific to Finnish justifications, and the emancipation discourse specific to Spanish justifications.

The activity discourse and the emancipation discourse depict very different ways of understanding the purpose and the scope of potential of basic income. Based on the analysis, there is a wide consensus among parliamentarians across the case parliaments on the need to streamline the social safety net and that working life has changed. The results illustrate the complexities of basic income and how it can be conceptualized and justified in various ways. To discuss politics of basic income and how the proposal is received in different countries, there is a need for future case studies that examine how basic income looks like within local discourses, and how these discourses connect with the institutional and political context in which they appear.