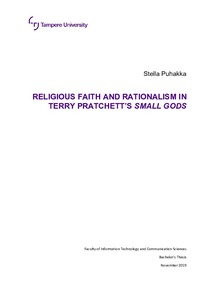 Englannin kielen, kirjallisuuden ja kääntämisen tutkinto-ohjelma
Informaatioteknologian ja viestinnän tiedekunta - Faculty of Information Technology and Communication Sciences
This publication is copyrighted. You may download, display and print it for Your own personal use. Commercial use is prohibited.

This thesis examines the treatment of institutional religion, religious faith and believers in Terry Pratchett’s Small Gods arguing that the novel calls for transparency and fairness in religious institutions and critical thinking, understanding and tolerance from those with a belief system. The novel highlights these issues through the relationship between its main character, Brutha, and his god, Om, as they explore the world beyond the theocratic nation of Omnia. Their interactions with one another and the world at large are analysed with the help of fantasy and satire as well as real world equivalents for the ideas, ideologies and religions presented.
Small Gods uses both religious and political satire in its efforts to criticise religion. In its political satire, the novel highlights the dangers of the intertwining of religion, state, and law enforcement, and questions religious expansion and censorship for power’s sake. Its religious satire, on the other hand, is more interested in religious figures, ideas and texts as it ridicules extremism within such institutions. These two types of satire are irrevocably linked to one another within the novel as those seeking political power do so through religious means. They are also used to highlight the individuals inside these outwardly dangerous institutions and show the conditions in which they practice their faith. By showing different individuals within these institutions, Small Gods highlights a need for compassion and understanding in our discussions with individuals who choose to believe differently from us. It also reminds readers that they should not believe in something blindly, but rather criticise and question what they are told in order to keep themselves and others honest and safe.
In the end, Pratchett’s satire is a soft but effective call for critical thinking, understanding and separation of religious and political aims. It also shows that everything made by humans will have its own faults because its creators are not perfect but this does not make all human-made things evil. On the contrary, most of the human-made religions, ideologies, scientific discoveries and political institutions in Small Gods were initially trying to make human lives easier and to provide society with rules and certainty. Therefore, this thesis argues that Small Gods is not an antireligious novel but rather a novel about critical thinking.