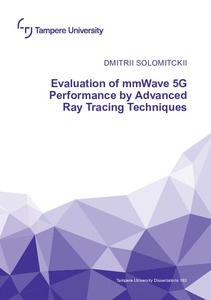 Technological progress leads to the emergence of new concepts, which can change people’s everyday lives and accelerate the transformation of many industries. Among the more recent of these revolutionary concepts are big data analysis, artificial intelligence, augmented/virtual reality, quantum computing, and autonomous vehicles. However, this list would be incomplete without referring to fifth-generation (5G) technology, which is driven by several trends. First, the exponential growth of the worldwide monthly smartphone traffic up to 50 petabytes during the next three years will require the development of mobile networks supporting high datasharing capabilities, excellent spectral efficiency, and gigabits per second of throughput. Another trend is Industry 4.0/5.0 (also called the smart factory), which refers to advanced levels of automation requiring millions of distributed sensors/devices connected into a scalable and smart network. Finally, the automation of critical industrial processes, as well as communication between autonomous vehicles, will require 99.999% reliability and under 1 ms latency as they also become the drivers for the emergence of 5G.

Besides traditional sub-6 GHz microwave spectrum, the 5G communication encompasses the novel millimeter-wave bands to mitigate spectrum scarcity and provide large bandwidth of up to several GHz. However, there are challenges to be overcome with the millimeter-wave band. The band suffers from higher pathloss, more atmospheric attenuation, and higher diffraction losses than microwave signals. Because the millimeter-wave band has such a small wavelength (< 1 cm), it is now feasible to implement compact antenna arrays. This enables the use of beamforming and multi-input and multi-output techniques. In this thesis, advanced ray tracing methodology is developed and utilized to simulate the propagation mechanisms and their effect on the system-level metrics. The main novelty of this work is in the introduction of typical millimeter-wave 5G technologies into channel modelling and propagation specifics into the system-level simulation, as well as the adaptation of the ray tracing methods to support extensive simulations with multiple antennas.