Development of Semiconductor Nanowire Materials for Electronic and Photonic Applications 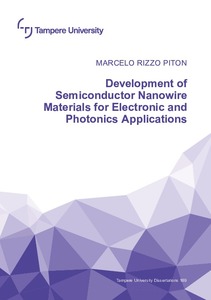 The thesis is concerned with study of GaAs nanowires fabricated on Si substrate. The possibility of growing III-V semiconductor materials directly on silicon in the form of nanowires is an attractive route to the integration of microelectronic, photonic and optoelectronic technologies. To this end, development of functional heterostructure require effective and controllable doping but the dopant incorporation mechanisms involved in nanowire growth can be quite different from the well-established semiconductors thin film technology. The interplay of the different dopant incorporation mechanisms and the competition between axial and radial growth can result in dopant concentration gradients in the nanowires.

As a key technology development enabling the study of transport properties in nanowires, a method for fabricating electrical contacts on single NWs using electronbeam lithography is reported. On the other hand, the reduced dimensions and the quasi one-dimensional nanowire geometry are challenging factors for the fabrication of electrical contacts in the correct geometry for Hall effect measurement, which is traditionally used in planar film to determine the dopant concentration and carriers mobility. Therefore, alternative techniques were employed to gain an understanding of the dopant incorporation mechanisms. To this end, Raman spectroscopy and current-voltage analysis on single-nanowire were used to estimate the spatial distribution of the Be and Te dopants along the axial direction of GaAs nanowires. The study reveals that the dopant incorporation mechanisms are strongly affected by the growth conditions for both p-type and n-type GaAs nanowires, resulting in gradients of dopant concentration along the nanowires.

Besides the carrier transport properties, the waveguide properties of semiconductor nanowires were explored in the area of chiral sensing and emission of circularly polarized light. By fabricating asymmetric gold layers deposited on the nanowires sidewalls and under the adequate experimental conditions an extrinsic optical chirality configuration is achieved. The results show a strong chiral behavior in both absorption and emission of the partially Au-coated nanowires, and paves the way for applications such as chiral sensing and emitting devices.