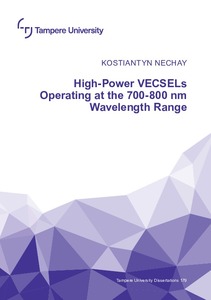 Optically pumped vertical-external-cavity surface-emitting lasers (OP-VECSELs) constitute a very flexible laser platform, delivering high-power and high-brightness emission at a vast wavelength range. However, there are certain spectral gaps where efficient VECSEL operation has remained elusive. To this end, the main objective of the thesis was to demonstrate a high-power direct-emitting VECSEL in the 700– 800 nm wavelength region, which has not been addressed significantly before this work. Two different approaches were followed to fulfill the research objective.

In a first path we focused on direct emitting quantum well (QW)-based VECSELs exploiting AlGaAs/GaAs material system. Record-high output powers of 4.24 W and 3.25 W at the 755 nm and 765 nm were demonstrated, respectively. As negative points of this approach, we note the peculiarity of polarization features and the relatively short lifetime arising from defects within the structure.

A second approach of this thesis was to realize intracavity second-harmonic generation (SHG) of the infrared 1.5 μm VECSELs. Furthermore, the work on the 1.5 μm VECSELs has also followed two complementary directions, resulting in: i) development of the first 1.5 μm quantum dot (QD)-based VECSEL, and ii) development of the first flip-chip QW VECSEL at the same wavelength. QD-based gain media can offer additional advantages over conventional QW devices, such as wider gain bandwidth. Whereas, the flip-chip thermal management scheme avoids the usage of expensive intracavity heat spreaders (that can distort the laser beam profile), paving the way for large volume manufacturing of such VECSELs. The achieved results at the fundamental wavelength include 2.25 W from the QD-based VECSEL and 3.65 W from the flip-chip QW-VECSEL. Finally, SHG of 750 nm emission was realized from both QD and QW VECSELs yielding 1.2 W and 2.25 W of output power, respectively. The demonstrated SHG results constitute a more viable alternative to the direct emitting structures due to much longer lifetime.

As possible applications of the laser technology developed in the thesis, we would mention biophotonics and medicine due to high penetration depth of 750 nm light into human tissues. In addition, further development of 750 nm lasers would lead to demonstration of UV emission around 380 nm, which will be particularly useful in atomic molecular and optical physics applications.