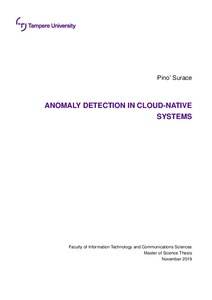 In recent years, microservices have gained popularity due to their benefits such as increased maintainability and scalability of the system. The microservice architectural pattern was adopted for the development of a large scale system which is commonly deployed on public and private clouds, and therefore the aim is to ensure that it always maintains an optimal level of performance. Consequently, the system is monitored by collecting different metrics including performancerelated metrics.
The first part of this thesis focuses on the creation of a dataset of realistic time series with anomalies at deterministic locations. This dataset addresses the lack of labeled data for training of supervised models and the absence of publicly available data, in fact the data are not usually shared due to privacy concerns.
The second part consists of an empirical study on the detection of anomalies occurring in the different services that compose the system. Specifically, the aim is to understand if it is possible to predict the anomalies in order to perform actions before system failures or performance degradation. Consequently, eight different classification-based Machine Learning algorithms were compared by collecting accuracy, training time and testing time, to figure out which technique might be most suitable for reducing system overload.
The results showed that there are strong correlations between metrics and that it is possible to predict the anomalies in the system with approximately 90% of accuracy. The most important outcome is that performance-related anomalies can be detected by monitoring a limited number of metrics collected at runtime with a short training time. Future work includes the adoption of prediction-based approaches and the development of some tools for the prediction of anomalies in cloud native environments.