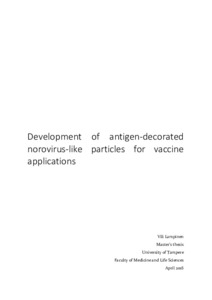 Due to limitations in current influenza vaccines, an innumerable number of people are taken to bed and over 200,000 lives are lost yearly to seasonal influenza. This thesis work aimed to create a prototype vaccine that would be inexpensive to manufacture and that could generate a powerful immune response, effective against multiple influenza strains for several years, or even decades. Using the robust and easy-to-produce norovirus-like particle as a vaccine platform can reduce the generation time of new vaccines. The particles can be conveniently decorated with conserved antigens using the high-affinity avidin-biotin bond or the isopeptide-bond-forming SpyCatcher/SpyTag pair.
Conserved fragments of the influenza matrix-2 and hemagglutinin protein were genetically fused to SpyCatcher or a selected type of avidin and expressed in E. coli. Avidin-fused antigens could not be extracted in a useful form, but the SpyCatcher-antigen fusion proteins were expressed efficiently in BL21 Star E. coli. After process optimization, respective yields of 34 and 27 mg/L of SpyCatcher-fused matrix-2 and hemagglutinin fragments were obtained. The yields were estimated for the >95% pure end products of single-step affinity chromatography purification processes. SpyTag or AviTag were genetically fused to norovirus-like particles to allow for their decoration with SpyCatcher or avidin, respectively. The particles were produced in the Hi5 insect cell line and purified with 30% sucrose cushion pelleting, followed by cation exchange chromatography. This resulted in over 95% pure norovirus-like particles with an approximate yield of 11 mg/L.
SpyTagged norovirus-like particles and SpyCatcher-antigens were mixed together. SDS-PAGE analysis showed that the components had covalently conjugated and dynamic light scattering studies confirmed monodisperse, decorated particles with hydrodynamic diameters of around 50 nm, which is similar to previously studied norovirus-like particles. In addition, Western blotting showed that the AviTagged norovirus-like particles are biotinylated and that avidin can bind them. The antigen-decorated virus-like particles are ready for use in pre-clinical animal experiments.