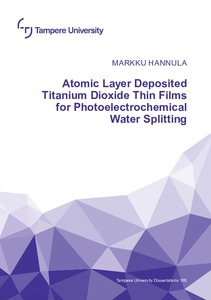 Increasing energy consumption is one of the greatest challenges the humankind is facing in the 21st century. Fossil fuels cannot be used to solve the problem due to the already alarming CO2 concentration in the atmosphere and consequent global warming. A more sustainable solution must be found by replacing the polluting oil and coal based energy production with clean renewable energy sources. From these solar energy is one of the most promising due to its practically unlimited capacity. However, the capacity shows strong fluctuations due to the day/night cycle and intermittent cloud coverage, which necessitates efficient technologies for storing and transporting solar energy. This can be achieved by storing the energy directly into chemical bonds. In photoelectrochemical water splitting water molecules are dissociated into hydrogen and oxygen molecules. Hydrogen has the highest energy density of all fuels and can be stored and converted into electricity on demand. The water splitting reaction takes place on semiconducting metal oxide photoelectrodes.

This Thesis focuses on studying and optimizing the properties of atomic layer deposited (ALD) TiO2 photoanodes. Titanium dioxide is a versatile material for both light absorbing photoactive layers and for passivating and protecting other semiconductor materials used in photoelectrodes. The ALD method makes it possible to accurately control the thickness of the TiO2 film and to deposit conformal homogeneous layers even on highly 3D-structured substrates. However, TiO2 possesses some challenges, as the chemical stability of the as-deposited ultra-thin films is poor in alkaline electrolytes and the large band gap prevents light absorption outside the ultraviolet region. Based on the results of this Thesis, these disadvantages can be remedied or mitigated with thermal treatments following the growth of the TiO2 thin film. Annealing the films in vacuum at 500–900 °C leads to the formation of O– species, which were shown to stabilize the TiO2 film while maintaining the amorphicity. On the other hand, it was found that annealing in oxidizing conditions leads to the crystallization of the film with simultaneous improvement in both stability and catalytic properties. Additionally, TiO2 derived microstructured TiSi was studied as an intermediate layer for optimizing charge carrier separation and charge transfer in a TiO2/TiSi/Si heterojunction photoanode. As evident by the results of this Thesis, metal-like TiSi islands can act as effective charge transfer mediators and recombination centers in Z-scheme photoanodes.

This Thesis underlines the importance of the knowledge-based approach to optimize the molecular and electronic properties of the ALD grown thin films in general and in particular, the properties of the TiO2 thin film for water splitting reaction. Especially the electron spectroscopic techniques in both traditional spectroscopic mode and more novel imaging spectromicroscopic mode will enable a solid base for understanding the optoelectronic properties of various photonic materials for future applications.