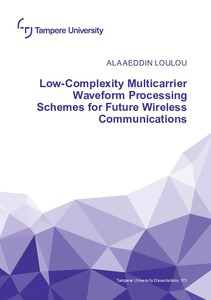 Wireless communication systems deliver enormous variety of services and applications. Nowa- days, wireless communications play a key-role in many ﬁelds, such as industry, social life, education, and home automation. The growing demand for wireless services and applications has motivated the development of the next generation cellular radio access technology called ﬁfth-generation new radio (5G-NR). The future networks are required to magnify the delivered user data rates to gigabits per second, reduce the communication latency below 1 ms, and en- able communications for massive number of simple devices. Those main features of the future networks come with new demands for the wireless communication systems, such as enhancing the efﬁciency of the radio spectrum use at below 6 GHz frequency bands, while supporting various services with quite different requirements for the waveform related key parameters. The current wireless systems lack the capabilities to handle those requirements. For exam- ple, the long-term evolution (LTE) employs the cyclic-preﬁx orthogonal frequency-division multiplexing (CP-OFDM) waveform, which has critical drawbacks in the 5G-NR context. The basic drawback of CP-OFDM waveform is the lack of spectral localization. Therefore, spectrally enhanced variants of CP-OFDM or other multicarrier waveforms with well localized spectrum should be considered.

This thesis investigates spectrally enhanced CP-OFDM (E-OFDM) schemes to suppress the out-of-band (OOB) emissions, which are normally produced by CP-OFDM. Commonly, the weighted overlap-and-add (WOLA) scheme applies smooth time-domain window on the CP- OFDM waveform, providing spectrally enhanced subcarriers and reducing the OOB emissions with very low additional computational complexity. Nevertheless, the suppression perfor- mance of WOLA-OFDM is not sufﬁcient near the active subband. Another technique is based on ﬁltering the CP-OFDM waveform, which is referred to as F-OFDM. F-OFDM is able to provide well-localized spectrum, however, with signiﬁcant increase in the computational com- plexity in the basic scheme with time-domain ﬁlters. Also ﬁlter-bank multicarrier (FBMC) waveforms are included in this study. FBMC has been widely studied as a potential post- OFDM scheme with nearly ideal subcarrier spectrum localization. However, this scheme has quite high computational complexity while being limited to uniformly distributed sub- bands. Anyway, ﬁlter-bank based waveform processing is one of the main topics of this work. Instead of traditional polyphase network (PPN) based uniform ﬁlter banks, the focus is on fast-convolution ﬁlter banks (FC-FBs), which utilize fast Fourier transform (FFT) domain processing to realize effectively ﬁlter-banks with high ﬂexibility in terms of subcarrier bandwidths

and center frequencies. FC-FBs are applied for both FBMC and F-OFDM waveform genera- tion and processing with greatly increased ﬂexibility and signiﬁcantly reduced computational complexity.

This study proposes novel structures for FC-FB processing based on decomposition of the FC-FB structure consisting of forward and inverse discrete Fourier transforms (DFT and IDFT). The decomposition of multirate FC provides means of reducing the computational complexity in some important speciﬁc scenarios. A generic FC decomposition model is proposed and analyzed. This scheme is mathematically equivalent to the corresponding direct FC imple- mentation, with exactly the same performance. The beneﬁts of the optimized decomposition structure appear mainly in communication scenarios with relatively narrow active transmis- sion band, resulting in signiﬁcantly reduced computational complexity compared to the direct FC structure.

The narrowband scenarios ﬁnd their places in the recent 3GPP speciﬁcation of cellular low- power wide-area (LPWA) access technology called narrowband internet-of-things (NB-IoT). NB-IoT aims at introducing the IoT to LTE and GSM frequency bands in coexistence with those technologies. NB-IoT uses CP-OFDM based waveforms with parameters compatible with the LTE. However, additional means are needed also for NB-IoT transmitters to improve the spec- trum localization. For NB-IoT user devices, it is important to consider ultra-low complexity solutions, and a look-up table (LUT) based approach is proposed to implement NB-IoT uplink transmitters with ﬁltered waveforms. This approach provides completely multiplication-free digital baseband implementations and the addition rates are similar or smaller than in the basic NB-IoT waveform generation without the needed elements for spectrum enhancement. The basic idea includes storing full or partial waveforms for all possible data symbol combinations. Then the transmitted waveform is composed through summation of needed stored partial waveforms and trivial phase rotations. The LUT based scheme is developed with different vari- ants tackling practical implementations issues of NB-IoT device transmitters, considering also the effects of nonlinear power ampliﬁer. Moreover, a completely multiplication and addition- free LUT variant is proposed and found to be feasible for very narrowband transmission, with up to 3 subcarriers. The ﬁnite-wordlength performance of LUT variants is evaluated through simulations.