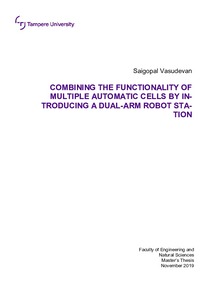 Automaatiotekniikan DI-ohjelma - Degree Programme in Automation Engineering
Tekniikan ja luonnontieteiden tiedekunta - Faculty of Engineering and Natural Sciences
This publication is copyrighted. You may download, display and print it for Your own personal use. Commercial use is prohibited.

The industrial revolution 4.0 is resulting in a shift of production and manufacturing processes to become more efficient and streamlined. This involves the refurnishing and upgrading of existing technology in production lines. Significant research done in the field of dual-arm robot manipulators shows us that anthropomorphic robots can be used interchangeably or replace humans, without major changes to the workplace, resulting in low cost, flexible automation and increased functionality. This thesis implementation aims to merge the functionalities of two automatic workstations by upgrading the elements of one of the workstations and removing the other workstation from the line. Based on the available resources and existent in-lab facilities, the prime objective is to determine the most efficient means to utilize a dual-arm manipulator to combine and update the functionalities of these two individual cells. And, how best to create exposure, by demonstrating the operations and features of the relatively unacquainted breed of industrial robots to new generations of students. This thesis focuses on the virtual implementation of the dual-arm station and the process flow is modelled and simulated, as proof of concept. The physical implementation would be carried out subsequently.

Based on an extensive analysis of relevant literature, manipulator capabilities, in-house fabrication and purchasing feasibilities; the most efficient implementation was made after multiple iterative changes in cell and tooling design, and the process was created using the offline programming tool. The created dual-arm cell has replaced two individual robot manipulators and additional conveyor systems and acts as both, a production and an Automatic Storage and Retrieval System (AS/RS) unit, additionally it enables the intelligent production line (where the cell is being installed) to interact with other isolated intelligent systems in the laboratory. The introduced changes to the production line have increased its functionality, while removing obsolete equipment. The production efficiency is increased while reducing the space utilized and demonstrates the operation of a dual-arm industrial robots. Future works to improve the operations in the cell may include using anthropomorphic hands as tooling and utilizing intelligent vision systems to additionally handle deformable linear objects for the REMODEL project of the Horizon 2020 research and innovation programming, while still serving its originally intended purpose in the intelligent production line.