COLORLESS-An exploration toward architecture as a language 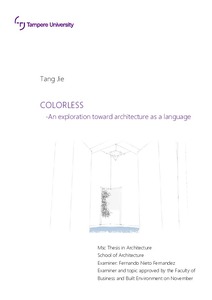 Architecture is a long-standing discipline, since it appears when human has traceable history. And it is always considered as a subject mixing art and engineering together. Some architectural theorist has used the term” Genius loci” to stress that architecture is about both physical and spiritual being. Historically, architecture plays the role also as a cosmological symbol to show how human perceive the world they live in and an edification tool for the mass and a bridge between the divinity and the secularity. In contemporary, After the baptizing of modernism, people tend to see architecture as a more functional object. And this article endeavours to recollect the ancient traditions and explore the possibilities of utilizing architecture as a tale-bearing, to relive the metaphor in the ancient script and complicated holographic ancient world view, thus providing inspirations for modern world in dealing with the relationship between mankind, geographical environment and cosmos.
The thesis contains mainly four chapters: Architecture as language, Background analysis, Design methodology, Design as process. the first chapter reviews the history of metaphor and symbolism in architecture to show that in ancient buildings the ancestors always make architecture as a cosmological embodiment especially in ritual architecture. The second chapter gives several case study in history to examine how architect utilize architecture as an expression tool to convey certain information or ideology and how they reconcile the relationship between heaven earth and man. The third chapter is about the methodology of the design which absorb from the ancient resources and cases and explain the metaphor of the design outcome. The fourth chapter is the presentation of the design including the process and outcome.