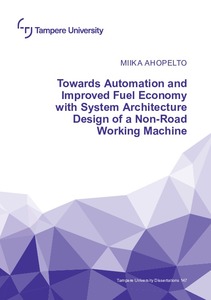 Increasing levels of automation and interest in fuel economy have been affecting the system design of non-road working machines. Both fuel economy and automation have been active research areas in non-road working machines. It is unlikely that in the near future electrification will solve the energy challenges of machines operating for long periods in forests, mines or fields. Therefore, it is necessary to increase the fuel efficiency of such machines with conventional technology, taking into account the fact that automation, along with the diversity of subcontractors and performance requirements, has increased the complexity of these machines.

A modular abstraction layer architecture is proposed for the machine level to support the development of automation and comparison of fuel economy. The architecture is developed and selected on the premise that a machine is operated with different automation levels between manual and autonomous operation and employs alternative control methods for different operation conditions. The designed system architecture is compared with alternative approaches by using trade-off analysis with defined scoring functions.

For improving fuel economy and demonstrating the capability of the designed architecture, a modular power management architecture is realised to meet the performance requirements of the machine. This architecture breaks the system down into smaller modules to facilitate design and development. Further, the architecture separates control of the power sources from the consumers, providing a new degree of freedom in designing the subsystems, as the consumer modules are not coupled with the engine.

The improvement in fuel economy is based on the MinRpm control strategy, which is integrated with the power management architecture. The objective of MinRpm is to minimise the rotational speed of the engine, which leads to the engine operating with higher partial loads and in a higher fuel efficiency region. In addition, the components and subsystems that use relative constant torque use less energy when
the rotational speed is lower. Devices of this kind are typically fans, fixed displacement pumps and oil coolers, in which the torque demand is not highly dependent on the rotational speed of the engine. The proposed modular power management architecture with the MinRpm control strategy does not require any new components to make improvements in fuel economy, which, in turn, reduces the implementation costs.

In both simulations and in experimental tests with a municipal wheel loader, the control method resulted in fuel savings of 11 to 22% compared with a series-production machine on the market. The comparison is realised by integrating the emulated series-production machine control with the same system architecture that was developed for the power management system with MinRpm approach. Therefore, both control methods are realised with the same wheel loader, which eliminates discrepancy of the component properties.

Realisation of the alternative control methods in the designed system architecture demonstrates the compatibility needed when the machine is operated with different operating modes from manual to autonomous. Before fully autonomous machines become real, a different level of automation is needed to perform efficiently and safely in all operation conditions. Therefore, the designed system architecture is capable of rerouting control signals and control flows, while safety features are guaranteed when the control mode is changed.