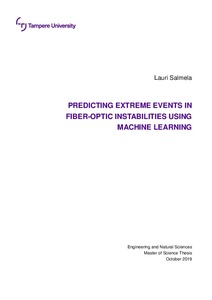 The study of ultrafast instabilities in optics is one of the key research area in nonlinear science. Optical fibers constitute an excellent testbed for the study of complex dynamics and instabilities because of the controlled environment and large repetition rate of thousands or millions laser pulses per second. One of the best known and most studied example of these instabilities is modulation instability which describes the exponential amplification of a small periodic modulation on top of continuous background signal. Modulation instability is a nonlinear process governed by the nonlinear Schrödinger equation and it can be observed in various nonlinear systems such as in fluids dynamics, plasma physics and Bose-Einstein condensates. Modulation instability can also be seeded by noise. The noise-driven dynamics lead to the emergence of high intensity temporal structures with random statistics, and it has been suggested that modulation instability may lead to the emergence of extreme events or rogue waves with high temporal intensities. The initial spectral broadening associated with noise-seeded modulation instability can further seed supercontinuum generation dynamics by which an initially narrowband spectrum is transformed into a broad spectral continuum via various nonlinear effects. Because of the noise-seeded dynamics, the generated supercontinuum spectra show large shot-to-shot fluctuations between subsequential pulses. Under particular conditions the noise-driven dynamics may lead to the generation of a small number of extreme red-shifted rogue solitons associated with long-tailed ”rogue wave” statistics.
The study of ultrafast noise-seeded dynamics must be conducted in real-time, i.e. on a single-shot basis, since average measurements will wash out any dynamical features of the system. In general, current real-time techniques often provide only partial information excluding information about the phase of the light field which precludes the possibility for directly relating the spectral and temporal properties of laser light. Methods for direct ultrafast time-domain measurements of the electric field do exists but the associated experimental setups are generally complex and remain limited in various ways. This thesis provides a new approach to the study of nonlinear instabilities and shows how machine learning can overcome these restrictions to yield time-domain information of noise-seeded dynamics based only on spectral intensity measurements.
Specifically, to correlate the spectral and temporal properties of modulation instability, numerical simulations of the generalized nonlinear Schrödinger equation are used for training a supervised neural network which is further applied to experimental modulation instability spectra to obtain the probability distribution for the maximum temporal intensity of the instability field. The maximum temporal intensity from the simulations is predicted with high accuracy, given that the spectral dynamic range is sufficiently high. For the experimental spectra, a real-time high dynamic range experimental setup based on spectral windowing and differential attenuation is introduced. The statistics of modulation instability are well reproduced by applying the simulation-trained neural network to the experimental spectra. Additionally, an unsupervised clustering analysis is used for classifying the spectra into classes with distinct temporal characteristics. Finally, the analysis is extended to the extreme case of supercontinuum generation and it is shown how a neural network model can be used for obtaining temporal information on rogue solitons. In particular, the temporal intensity and the Raman-induced temporal shift of the extreme red-shifted rogue solitons are predicted with excellent accuracy. The results of this thesis open up new perspectives for the study and prediction of time-domain characteristics of ultrafast noise-seeded dynamics.