Analysis and Mitigation of Channel Non-Reciprocity in TDD MIMO Systems 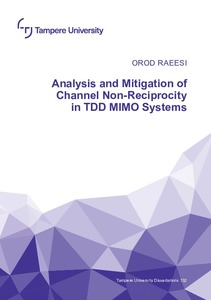 The ever-growing demands for higher number of connected devices as well as higher data rates and more energy eﬃcient wireless communications have necessitated the use of new technical solutions. One of the main enablers in this respect is Multiple-Input Multiple-Output (MIMO) systems in which transmitting and receiving sides are equipped with multiple antennas. Such systems need precise information of the MIMO radio channel available at the transmitter side to reach their full potential. Owing to the reciprocity of uplink and downlink channels in Time Division Duplexing (TDD) systems, Base Stations (BSs) may acquire the required channel state information for downlink transmission by processing the received uplink pilots. However, such reciprocity only applies to the physical propagation channels and does not take into consideration the so-called observable or eﬀective uplink and downlink channels which also include the possible non-reciprocal behavior of the involved transceiver circuits and antenna systems.

This thesis focuses on the channel non-reciprocity problem in TDD MIMO systems due to mismatches in Frequency Response (FR) and mutual coupling of transmitting and receiving chains of transceivers and associated antenna systems. The emphasis in the work and developments is placed on multi-user MIMO precoded downlink transmission. In this respect, the harmful impacts of channel non-reciprocity on the performance of such downlink transmission are analyzed. Additionally, non-reciprocity mitigation methods are developed seeking to reclaim TDD reciprocity and thus to avoid the involved performance degradations.

Firstly, the focus is on the small-scale MIMO systems where BSs are equipped with relatively limited number of antennas, say in the order of 4 to 8. The provided analysis on Zero-Forcing (ZF) and eigen-based precoding schemes in single-cell scenario shows that both schemes experience considerable performance degradations in the presence of FR and mutual coupling mismatches. Whereas, in general, the system performance is more sensitive to i) non-reciprocity sources in the BS transceiver; and ii) mutual coupling mismatches. Then, assuming reasonably good antenna isolation, an Over-The-Air (OTA) pilot-based algorithm is proposed to eﬃciently mitigate the BS transceiver non-reciprocity. The numerical results indicate high accuracy in estimating the BS transceiver non- reciprocity parameters as well as considerable improvement in the performance of the system. In multi-cell scenario, both centralized and decentralized precoding approaches are covered while the focus is on the impacts of FR mismatches of UE transceivers. The how that there is severe degradation in the performance of decentralized precoding while centralized precoding is immune to such channel non-reciprocity impacts.

Secondly, the so-called massive MIMO systems are considered in which the number of antennas in the BS side is increased with an order of magnitude or more. Based on the detailed developed signal models, closed-form analytical expressions are ﬁrst provided for eﬀective signal-to-interference-plus-noise ratios of both ZF and maximum ratio transmission precoding schemes. The analysis covers the joint impacts of channel non-reciprocity and imperfect uplink channel estimation and shows that while both precoding schemes suﬀer from channel non-reciprocity impacts, ZF is more sensitive to such non-idealities. Next, a concept and an algorithm are proposed, involving UE side measurements and processing, to be deployed in the UE side to eﬃciently estimate the level of BS transceiver non-reciprocity. This enables the UEs to inform the BS about the optimum time to perform channel non-reciprocity mitigation round and thus improves the spectral eﬃciency. Finally, in order to mitigate channel non-reciprocity in massive MIMO systems, an eﬃcient iterative OTA pilot-based algorithm is proposed which estimates and mitigates transceiver non-reciprocity impacts in both BS and UE sides. Compared to the state-of-the-art methods, the simulation results indicate substantial improvements in system spectral eﬃciency when the proposed method is being used.

Overall, the analyses provided in this thesis can be used as valuable tools to better understand practical TDD MIMO systems which can be very helpful in designing such systems. Furthermore, the channel non-reciprocity mitigation methods proposed in this thesis can be deployed in practical TDD MIMO syst channel reciprocity and thus signiﬁcantly increase the spectral eﬃciency.