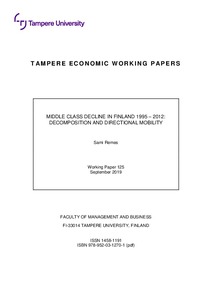 This paper investigates middle class decline in Finland from 1995 to 2012. The purpose was to examine the subgroup contributions, the role of structural change, and directional mobility. Change in middle class rate was decomposed to study contributions of group-specific rates and structural changes, and the directional mobility was analysed by changes in individuals' income status. The results from earlier studies about the middle class decline in Finland were confirmed, and decomposition analysis indicates that the majority of the decline has been due to the rate-effect, especially among the lowest educated population. Furthermore, changes in age and education structures have contributed to the decline, while the structural change in primary activity status has had a counteracting effect. Results of the decomposition are supported by the mobility results, which indicate that population with tertiary (no secondary) degree have been subject to upward (downward) mobility over the observed time period. In conclusion, the middle class decline and polarization in Finland have asymmetrically affected different education groups. Most educated have climbed up the income distribution, while the lowest educated group have fallen.