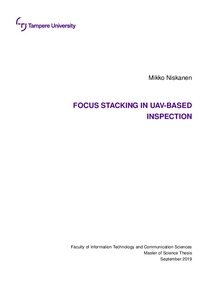 In UAV-based inspection the most common problems are motion blur and focusing
issues. These problems are often due to low-light environment, which can be compensated to some extent with shorter exposure times by using larger apertures and luminous lenses. Large apertures lead to limited depth of field and a solution called focus stacking can be used to extent the focal depth. The main goal of this thesis was to find out the feasibility of focus stacking in UAV inspection and a prototype system was designed and implemented.

The acquisition system was implemented with an industrial type camera and an electrical liquid polymer lens. The post-processing software was implemented with OpenCV computer vision library because libraries offer the best possibilities to affect the low-level functionality. Three algorithms were chosen for the image registration and three for the image fusion. In addition, improvements to the speed and accuracy of the registration were examined. The implemented system was compared to equivalent open-source applications in each phase and it outperformed those applications in general performance.

The most important goal was achieved and the system managed to improve the image data. A sequential acquisition system is not the best option on moving platform due to the perspective changes causing artifacts in image fusion. Also the optical resolution of the liquid lens was not enough for high resolution inspection imaging. However the idea of focus stacking works and the best solution for a mobile platform would be a multi-sensor system capturing the images simultaneously.