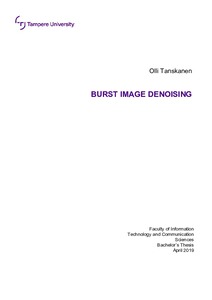 Modern smartphone images go through very heavy image processing before they are, for example stored, transmitted or presented on the screen. Image denoising, a process of removing noise, is one of the very first steps in smartphone image processing. Image denoising is an important step in smartphones because unprocessed images have relatively high noise levels, which can make images visually less appealing. The high noise levels are mostly caused by the relatively small sizes of the smartphone cameras and the restrictions on the exposure time. High exposure time decreases the noise levels, but also increases the blurriness of the image due to motion blur, and therefore low exposure times are often preferred.

We also do experimental testing to show that burst denoising methods have a high potential in denoising performance and that they can result very good denoising results in smartphones.