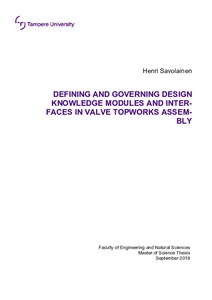 Modularity has long played a major role in industrial companies. Modularity has been used in many ways in products and successful modularization has been found to provide a competitive advantage. However, the idea, at the heart of modularity, that weakening linkages between modules allowing them to be managed as independent entities has not been exploited in design knowledge governance.
Metso Flow Control has implemented KBE-software Rulestream to support valve product development. In Rulestream, design information is compiled into design rules that are used by the software to create 3D-models and drawings. It has been decided to extend the use of the software to include the creation of a valve topworks assembly.
This work defines the entities in which the design rules will be governed. The design rules need to be divided into manageable modules so that the design rules can be managed in the future. The thesis investigates how the valve topworks assembly can be divided into modules that support knowledge governance. The interfaces between the modules are critical to the operation of the entire system.
The research method used is case study research, which is based on a literature review. The literature review examines modularity, modules, interfaces and modularization methods. Also some literature related to data governance will be reviewed. Based on the literature review, a method that is applicable to the modularization of the valve topworks assembly is selected.
The tool chosen for modularization of the valve topworks assembly is the Design Structure Matrix. The DSM is a tool that has been used extensively in product modularization. DSM also provides valuable information on the system. Several matrices are produced and the most value generating solution is selected. Based on the matrix, the design modules and their interfaces are determined. Design modules need to support knowledge management, so they need to mirror the existing organizational structure. Modules are independent entities that can be modified without affecting other modules. Interdependencies between modules are manifested in module interfaces. Design knowledge that affects more than one module is the interface between the modules. Governing this kind of information is very important. Module governance requires specification of the owners of the modules and interfaces. The owner is responsible for what changes can be made to the modules and interfaces. The module partitioning and ownership defined in the thesis support the maintenance of design knowledge.
Based on the modules defined in the thesis, a CAD skeleton model of valve topworks assembly was created. The skeleton model is built from defined modules and it documents the physical interfaces needed in connecting the modules.