Phosphate Glasses and Fibers as an Alternative to Silicate Bioactive Glasses 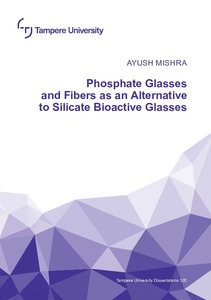 The field of bioactive glasses started with the discovery of the first bioactive glass composition 45S5 or Bioglass® in 1969. In the 1980s, the glass particulates of 45S5 depicted the ability to induce osteogenesis, as opposed to the then preva- lent bioinert metallic implants. Later, the dissolution products of 45S5, which was a silicate glass, were found to stimulate the genes in human osteoblasts and act as growth factors, providing signals to the cells. Over the years, other bioactive glass compositions such as 13-93 and BonAlive® (S53P4) were discovered, which were also silicate glasses. Even today, 45S5 remains the gold standard for bioactive glasses. However, in recent times, there has been a rise in the demand for more sophisticated implants, such as scaffolds made from polymer and glass, or only glass. Furthermore, bioactive glass fibers are also appealing to the re- searchers for mechanically reinforcing the scaffolds, owing to their better me- chanical properties than polymers. However, in this regard, the silicate glasses are known to pose serious challenges to the researchers, due to their incongruent dissolution mechanism and poor thermal processability. Moreover, for short term applications, ranging from a few weeks to a few months, the degradation rate of the commercially available silicate glasses is considered too slow.

In light of the above facts, the main aims of this thesis are: (i) to develop new glasses within the phosphate glass family, which possess good thermal pro- cessability, have additional functionalities such as antimicrobial properties and invoke favorable cell response for developing novel biomaterials in future, and (ii) to develop glass fibers based on these compositions for advanced applications such as biosensing, and possessing decent mechanical properties for reinforcing composites.

To accomplish these objectives, a new series of phosphate glasses doped with metallic ions such as Ag, Cu and Fe was developed based on a promising phos- phate glass composition studied earlier. These glasses were analyzed in terms of their structural, thermal and in-vitro dissolution properties. Furthermore, the
antimicrobial properties of Ag and Cu glasses were also tested, relative to com mercial silicate bioactive glass. Then, preliminary cell culture tests were con- ducted using glass discs, and glass extracts (glass dissolution products contain- ing cell culture medium). Moving forward, two approaches were taken simultane- ously to improve the cell response to these glasses. Firstly, the glasses were subjected to a series of surface treatments to improve protein adhesion at their surface, which in-turn should play a role in improving the cell attachment at their surface. In the second approach, a small addition of borate at the expense of phosphate was done to increase the glass’ resistance to aqueous dissolution. Cell culture tests were then performed using glass extracts obtained from the new borophosphate glasses, and cell viability and proliferation were assessed and cytotoxicity of the extracts obtained. Finally, newly developed single core and core-clad glass fibers were also studied in terms of their mechanical properties and their potential in biosensing.


The newly developed phosphate glasses depicted a high degree of thermal pro- cessability and promising in-vitro dissolution characteristics. The Ag and Cu glasses presented antimicrobial properties even superior to the commercially available S53P4 in eliminating Staphylococcus epidermis. The surface treat- ments performed on the glass discs revealed an improvement in the protein ad- hesion, which in-turn vastly improved the cell attachment at their surface. In the other approach to improve cell growth and proliferation in the glass extracts, a small addition of borate at the expense of phosphate resulted in an improved cell response to the glass extracts, barring that of the Cu-doped glass. Indeed, the undiluted Cu extract exhibited a much higher cytotoxicity than all the other glass extracts, and hence was toxic to cell survival. In the study on phosphate glass fibers, the core-clad fiber was found to be promising for biosensing, owing to its ability to guide light effectively and maintain decent mechanical properties in-vitro (up to 4 weeks, and ~6 weeks in TRIS buffer solution respectively).

In summary, phosphate glasses with favorable cell response were obtained by tailoring their composition and using suitable surface treatments. These glasses were found to possess favorable thermal properties for fiber drawing and scaffold sintering, and the fibers drawn from these glass compositions showed promise in biosensing. Furthermore, they possessed high mechanical strength, and in the
future, they can be considered for reinforcing scaffolds. These new glasses and
glass fibers should pave the way for a new family of bioresorbable implants for a
wide array of biomedical applications in future.