Emotion-driven human-cobot interaction based on EEG in industrial applications 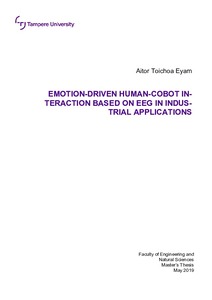 Currently, the world is facing its fourth industrial revolution which has been conceptualized into the term of “Industry 4.0”. Among all the features that include this idea, becomes essential to keep humans in the loop of the processes. Taking into account the human factor inside the industry is one of the most difficult aspects to manage optimally.
Different from machines, human beings’ behaviour is complicated to parametrize and anticipate. Combined with the fact that as time goes by industries are becoming more complex, it is necessary to develop adaptive systems.
One of the duties of the adaptive systems is to make machines adjust to situations that could be modified quickly or several times without decreasing the performance of the system. As a consequence, this concept is being applied to the robotic field too.
As the industries are evolving, more robots are being introduced in them sharing the workplace with humans. Consequently, the concept of Human-Robot Interaction (HRI) has become a great topic to improve. The level of success of this interaction is closely related to the level of trust in the same one. Human-Robot trust relation can be increased in several ways related to the robot, to the human or to the environment that surrounds the interaction.
In order to increase trust in HRI, among other parameters, it has been developed the collaboratives robots (cobots). Cobots are robots mean to work in a collaborative way with humans, changing the patterns of interaction established with robots.
However even if cobots are able to work hand-to-hand with humans, they sill need to understand in a better way human needs to become their colleagues.
The main aspect that defines human beings is their emotional state. Humans’ cognitive state is what characterize mostly all the decisions that they made during a day. Therefore, understanding humans’ emotional response is becoming a key target for the industrial field.
In seek of understanding humans emotions, there have been developed several ways to analyse the emotional state of a person by gesture recognition, speech recognition, electroencephalography, etc. Depending on the technique of analysis, there have been developed devices that can detect those emotions.
The aim of this thesis work is to develop a system that acts as a bridge between humans and cobots influencing positively to their interaction making a cobot adapt its behaviour to the emotional state of a human while performing a collaborative task.
By achieving this, major issues related to trust in HRI can be favoured, having impacts both in industry as in social fields.