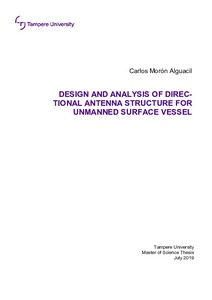 The purpose of this thesis is to design and analyse the structure of a directional antenna. The directional antenna is part of The Autonomous and Collaborative Offshore Robotics project, an exercise developed by the Tampere University of Technology.

The new structure design is introduced as a replacement of the solution prior to the realization of this thesis. After running protocol test to the original structure, several malfunctions were appreciated. These problems were related to the accuracy of the rotation system and its resistance to mechanical loads.

The realization of the mechanical design has been performed using Solidworks 2017. It is a CAD tool that allows the optimization of all the tasks related to this matter such as solid design, assemblies or blueprints. The process carried out to achieve the final structure has been to make iterative modifications until reaching the final product. As a result, the directional antenna is mounted in a birotational structure, allowing to modify the yaw angle around the z axis and the pitch angle around the y axis.

The control of the structure has been made by using an Arduino based microcontroller. It is in charge of powering and directing the actuators that rotates the components of the structure. The outcome has been obtaining full control by an operator of the aim direction of the antenna.

After building the structure, a series of tests has been carried out in order to measure the improvements of the new structure. The precision when rotating the structure around the yaw axis has been satisfactory. The maximum deviation observed from the target aim direction has been inferior to 0.5°. The accuracy around the pitch axis shows more disparity than the previous case, as the precision fluctuates regarding of the aim direction and the direction of the rotation. The values obtained vary in the range of 0.5-3.8°.