Optimization of Household Energy Management Based on the Simplex Algorithm 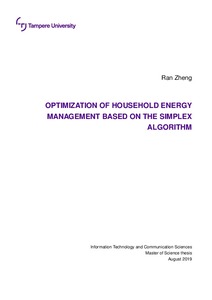 Small scale intermittent renewable energy consisting of roof-mounted photovoltaic generators and micro wind turbines for the household residential have been widely integrated into the power grid. Meanwhile, more and more home appliances are utilized, including schedulable and non-schedulable home appliances. With the deployment of smart technologies, the control strategies of home energy management system are developed and this provides the possibility to minimize the energy bill and improve the energy efficiency by scheduling the controllable home appliances without sacrificing preference of the customer.

In this thesis, an optimization strategy based on the Simplex algorithm has been proposed. The target is to optimize the energy consumption in households by scheduling the household appliances, considering the day-ahead electricity price from Nord Pool market and the roof-mounted PV production. Firstly, the schedules are generated from the optimization algorithm and then interpreted to control the appliances to achieve energy bill saving.

In order to evaluate the optimization algorithm, the water boiler is used as the controllable load. Two case studies for 24-hour illustrate that the implementation controlled by HEMS using this algorithm can contribute greatly to the energy bill savings. According to the two implementations, around 43% of reduction for the energy bill can be achieved. Considering the PV production integrated into HEMS and support from the distribution network operators, the more benefits can be achieved.

The switch panel in the AC Microgrid laboratory acts a crucial part in the implementations and it has seven 3-phase channels that can be utilized to connect with electrical appliances, home energy storage systems, and distributed generations such as micro wind turbines and roof-mounted PV panels. Each channel is equipped with two connectors to control the operation, the top of which is controlled by HEMS computer using wireless Z-Wave and the other one is controlled by dSpace which can be used to emulate the consumption pattern in the households. The algorithm and Z-wave interface are implemented in Matlab / Simulink environment and Z-wave makes it possible to control the boiler or other loads in real-time.