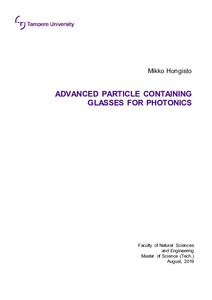 Parameters for the sintering process were optimized to produce transparent glass successfully. The produced glass is clearly transparent, but has a brown coloration to it. The source of the coloration is presumed to be either nanoscale defects scattering shorter wavelengths of light or carbon contamination. Luminescent particles survived the sintering process unchanged according to our luminescence measurements and therefore we presume the process to be safe for other particles as well.

YAG agglomerates were visible to the naked eye inside the glass when they were added in the glass batch. When added in the melt, the particles stayed on the top and did not diffuse inside the glass. According to emission measurements, the structure had changed in both cases. The glasses had an inhomogeneous distribution of particles and emission. The sintered glass had unchanged emission spectrum compared to the pure particles and a tenfold increase in emis-sion intensity relative to other methods of preparation. The resulting glass was not transparent due to particle agglomeration.

NaYF4 particles containing glass was also transparent with an unchanged emission spectrum. The particles were agglomerated and the glass had crystallized at the glass-particle -interface.