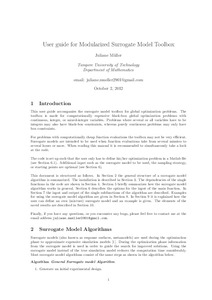 This user guide accompanies the surrogate model toolbox for global optimization problems. The toolbox is made for computationally expensive black-box global optimization problems with continuous, integer, or mixed-integer variables. Problems where several or all variables have to be integers may also have black-box constraints, whereas purely continuous problems may only have box constraints.

For problems with computationally cheap function evaluations the toolbox may not be very efficient. Surrogate models are intended to be used when function evaluations take from several minutes to several hours or more. When reading this manual it is recommended to simultaneously take a look at the code.

The code is set up such that the user only has to define his/her optimization problem in a Matlab file (see Section 6.1). Additional input such as the surrogate model to be used, the sampling strategy, or starting points are optional (see Section 6).