Modeling of Car Fires with Sprinklers 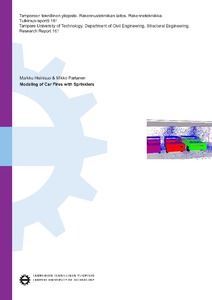 The goal of this study is to present background both for car fires and sprinklers design, focus being in sprinklers, because Eurocode method has not been yet accepted in all European countries, including Finland. The car-fires were not yet included in Eurocodes, although their calculation data has been widely accepted and validated with numerous tests completed in many fire laboratories in Europe and overseas.

The effect of sprinklers to the design value of the fire load [MJ/m2] is taken into account in EN 1991-1-2 Annex E using factors considering different active firefighting measures. Two factors deals with sprinklers and take into account: automatic water extinguishing system (0.61) and independent water supplies (0 => 1.0, 1 => 0.87, 2 => 0.7). In this report the Eurocode method is studied for car fires numerically by modeling the fires with the program FDS Version 5.5.3 of NIST. Firstly, the computer model is validated against tests completed in UK 2006 - 2009. Tests included car fires without and with sprinklers. Secondly, the case studies of three medium size car fires are modeled without and with sprinklers recommended to car-parks.

In the case studies the environment is modeled aiming to extreme conditions in car-parks when considering the structural design in fire. This means that the design space is without walls to ensure enough available oxygen and the height of the space is small, 3 m. Temperatures near the ceiling are reported in all cases. Temperatures are calculated reducing the cars’ heat release rates per area [kW/m2] without sprinklers corresponding to reductions of the design fire loads with factors 0.61 x 1.0 = 0.61, 0.61 x 0.87 = 0.53 and 0.61 x 0.7 = 0.43. These temperatures are compared to the results which are calculated by modeling the sprinklers with car fires. Details of the numerical models are reported. The Eurocode reduction does not take into account the fact that adjacent cars do not ignite, as is the case using the developed model and observed in the tests in the literature. The Eurocode reduction of fire load with sprinklers gives the same maximum temperatures as the simulation with sprinklers at the first peak of the heat release rate (HRR). The Eurocode method is reliable for design within this range, if the maximum temperatures in the beginning of the fire are those needed in fire design of structures. If it is used to simulate the temperatures after the first peak of HRR, then the temperatures are very conservative, based on the results.

Dr. Jukka Vaari from VTT, Finland, is acknowledged of the assistance for modeling sprinklers.