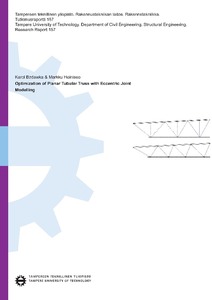 Tubular trusses are used in construction due to their low weight and ease of manufacturing. Compared to trusses made of I-sections, they have a relatively small painting area and do not require stiffeners at connections.

The size, geometry, and topology of the trusses have been studied extensively since the first optimization algorithms appeared. This study approaches the problem from a different angle. The considered truss is no longer modelled as a perfect truss but rather as a frame. The load on the top chord is distributed and not only applied as point forces at the nodes. The bending stiffness of all the elements is considered in the calculation of the structure’s statics, and bending resistance is verified. The joints are modelled with all the eccentricities resulting from the fabrication process. The rigidity of the joints is calculated and taken into account when determining the buckling length of individual members. The resistance of the connections and members is verified using the most novel European standards. The whole process of creating the model, running static analysis and code verification, is programmed into Matlab. The optimization of the truss is performed using the Particle Swarm Optimization algorithm that is also programmed in Matlab.

Two truss topologies were analysed: Warren truss and Warren truss with verticals. A number of trusses with different bracing system layouts were analysed for both. The locations of the nodes could vary within preset limits and were variable in the optimization process. The other variables were the member cross-sections – divided into several groups – and, in some cases, the truss height. Two steel grades were considered: S 355 and S 420.

It has been found that most of the cost came from the material and assembly of the truss. Most of the truss mass is located at the compressed top chord. By providing sufficient supports for the top chord, buckling can be avoided and the cross-section can be reduced, thus significantly reducing the top chord mass. Supporting the top chord at certain intervals requires a bracing system made of diagonals and verticals or just diagonals. The former consists of fewer elements and, since the assembly cost function depends heavily on the number of elements, it is recommended to use it.