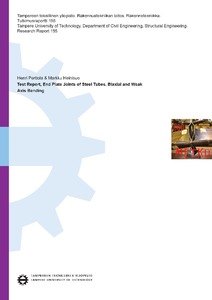 This report describes a series of twelve tests on splice joints of tubular beams with cold formed rectangular hollow steel sections. The splices were assembled by bolted flange plate joints (or extended end plate joints). Half of the tests used joints with “the normal assembly” (bolts, washers and nuts) other half used the “long bolts”, where the bolts of a joint were replaced by threaded bars and bush rings. The specimens (specimen = tubes and the joint) were loaded either with biaxial bending or weak axis bending.

The reported tests were carried out in Seinäjoki between 6 May and 2 November 2010. The preceding series of nine tests on extended end plate joints for rectangular tubes was condcted6 in Tampere two years before in May 2008. In those tests, the loading of the specimen was consistent with strong axis bending and all joints were assembled with long bolts (threaded bars + bush rings). These two series comprise a package of 21 tests on the splice joints of rectangular hollow tubes at ambient temperature (about 20 degrees centigrade) under three different loading conditions (strong axis, weak axis and biaxial bending). Two additional tests on splice joints were also carried out at elevated temperatures in Tampere in November 2010. These transient type fire tests have been described in [5]. Thus, the three test series comprise a total of 23 tests on extended end plate joints of rectangular tubes.

In every specimen two prefabricated parts were bolted together composing the beam with the splice joint at the mid span. The span L=1 m was the same in the reported tests and those of the other series mentioned above. The same beam profile (CFRHS 250x150x10) was used in all the tests at ambient temperature. The fire tests used the CFRHS 250x150x12.5 profile. The width and height of the end plates of the joint was fixed whereas their thickness varied. The locations of the bolts were changed, too. The bolts, nuts and washers of grade 10.9 used in the tests were M20. In the end plates and in the tubes, the strength class was S355. The steel of the bush rings was grade S235.