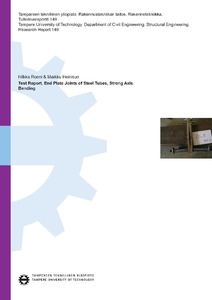 The most novel European standards for the design of steel EN 1993-1-8 (2005) and aluminum EN 1999-1-1 (2007) joints includes the component method to define the stiffness and to check ductility and resistance of different joints. The component method is very generic and it can be used for the design of many kinds of joints. This is true, if the structural behaviors of all the components appearing in the joints are known.

The standards do not cover the design of a very frequently used joint of rectangular tubular members. The design rules for the extended end plate joints are missing. The “extended” means: The bolts are locating outside the edge-lines of the cross-section.

There exist many cases where the rectangular tubular members are joined with these kinds of extended end plates and bolts to other members. One example is the base bolt joint. The splices of tubular members (beams, columns, chords, braces) are also frequently used. They can also joint beams to columns using blind bolts in these joints, and metal members to concrete or other materials using e.g. injection bolts. The joined members can be made of steel or aluminum.

If some bolt of the extended end plate joint is in tension, then it is essential to know the corresponding yield mechanism near this bolt. If this mechanism is known, then it is possible to develop the component for the component method of EN 1993-1-8 or EN 1999-1-1 to describe the behavior of this tension component. The tension component may act as individual or in group. Both situations should be considered, if they may realize, and the most critical situation is used in the design.

In (Wheeler et al., 2008) are given test results and design rules for the extended end plate joints of steel splice joints. In (Wald et al., 2000) and (Laine, 2007) are given the yield mechanisms for the base bolt joints using extended steel end plates. In (Wald et al., 2000) and (Laine, 2007) are given the verifications using the finite element models. No test results are in those two references. The differences between these joints are such that in splice joints the prying forces are active and in base bolt joints typically not. The activation of the prying forces depends on the elongation length of the bolt in tension.

The scope of this entire research is to derive and proof the proper yield mechanism for the tensile component of the extended end plate joint for tubular members. In this report steel joints are dealt. Both cases with and without prying forces should be considered. At this stage the bending around the strong axis is considered. The results of (Wheeler et al., 2008) are available for the splice joints.

In the base bolt joints the elongation length 8d is supposed for the base bolts in tension in EN 1993-1-8, where d is the diameter of the bolt. The 8d rule is based on an old US study of base bolt joints (Salmon, Shenker, 1956). In this report the tests results are given where the base bolt elongations are imitated using the steel tubes of the lengths about 8d around the tensile bolts. In further studies the analysis of the results will be given.

The test specimen were made by Rautaruukki Oyj and they were assembled in the laboratory. Tests were done in May 2008 in the laboratory of Structural Engineering in Tampere University of Technology (TUT), Tampere, Finland. Test arrangements, measured tests results and moment-rotation relationships based on the tests are given in this report.