Solidarity Economy in the context of the Nordic welfare state 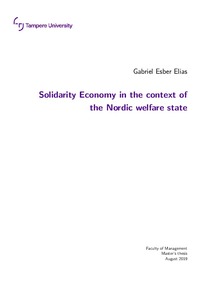 In debates over alternative economic practices to our current economic system, increased attention has been given to Solidarity Economy, a concept that encompasses a heterogeneous universe of self-managed enterprises led by the principles of democracy, equality, cooperation and a growing sense of environmental preservation. However, research has thus far largely focused on contexts of high social vulnerability and little attention has been given to the context of the Nordic welfare. This research identifies how the Nordic welfare enables and constrains the development of Solidarity Economy.

The research consists in qualitative data collected from semi-structured interviews with Solidarity Economy actors in Finland. The data is compiled into relevant themes with the support of thematic analysis. The themes are analyzed through the lens of structuration theory which was adopted as the theoretical framework due to its capability to unify structure and human agency. The research provides an extensive literature review of Solidarity Economy and a more clarified picture of the concept in Finland.

The analysis reveals that the high level of quality of life, as well as the public service provision, social security and certain infrastructure offered by the Nordic welfare can enhance the capability of individuals to promote Solidarity Economy. On the other hand, the same scenario may constrain the development of Solidarity Economy as it may produce the perception that systematic changes in the economy is not necessary.